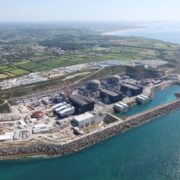 According to the official report of the IAEA, on 9 February 2017 at about 10:15 a.m. by CET, an explosion occurred in the turbine hall of Flamanville NPP Unit 1 (France), which caused a fire.

The fire was eliminated on 12:00 p.m. Medical assistance was provided to five workers, significant damage was not detected.

Radioactive releases to the environment were not registered. Flamanville NPP Unit 1 continued operation to 15:00, then its shutdown was planned according to the established procedures.