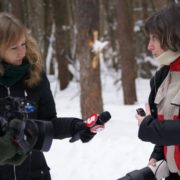 This was reported by representative of the State Scientific and Technical Center for Nuclear and Radiation Safety (SSTC NRS) Oleksandra Slepchenko during the ceremony dedicated to the completion of the pilot NATO project on retrieval of radioactive waste generated from the implementation of USSR military programs. The event was held in the Zhytomyr region on the territory of former Vakulenchuk storage facility. The facility was constructed during USSR times: within the period of 1960-1990. Military unit 83 330 functioned at that time in the Zhytomyr region. It served a missile base of USSR strategic nuclear forces. Nuclear weapon was supported at the facility: radiation sources were used for calibration of the devices with different measurement ranges and radiation types.

In order to bring storage facility into an ecologically safe state, the Cabinet of Ministers of Ukraine signed the Implementation Agreement with the NATO. The project of radwaste retrieval from the Vakulenchuk storage facility was implemented and territories were remendiated within the Agreement.

The first step was radiation survey of the facility, study of site history with radiological and ecological research. This resulted in forming a radiation contamination map. Activities of this stage were performed by the Kyiv Interregional State Specialized Enterprise.

The second stage was developing the Technical Decision, preliminary processing of waste, its retrieval, conditioning, packing in separate containers and transport for disposal. The third stage was remediation of facility territory. Activities of the second and third stages were performed by NT-ENGINEERING LTD that won the tender for the activities.

The SSTC supported the project at all stages. SSTC experts developed a review for the SNRIU based on which the Inspectorate issued the license to NT-ENGINEERING LTD for processing and retrieval of waste from the Vakulenchuk storage facility. “At present, radiation backround of the remediated territories is significantly lower than in Berdychiv, for example”, SSTC NRS representative Oleksandra Slepchenko said. “Anyway, as you see, the survey area is too compactly covered with snow. This allows us to come to the site in late May, early June and repeat measurements”. A few days before the celebration, SSTC experts visited the territory of the former Vakulenchuk storage facility with RanidSONNI radiation survey vehicle and Vasikka portable dosimeter-radiometer of gamma and neutron radiation with the ability to identify radionuclides.

The experts conducted a thorough investigation, which confirmed complete absence of neutron and gamma radiation on the remediated territories. Spectral characteristics of gamma radiation in Skrahlivka village at the site and surrounding areas show no lost industrial radiation source along the route.

As of 13 February 2017, radiation background of the remediated territories of the former Vakulenchuk radioactive waste storage facility meets the standard.