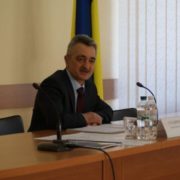 On 16 February 2017, the State Nuclear Regulatory Inspectorate of Ukraine developed a public report. SNRIU experts reported on activities in the sphere nuclear and radiation safety regulation performed in 2016 and shared the priority areas of activity planned for 2017.

In 2017, the SNRIU continued activities under the Action Plan for implementation of the Agreement on Association between Ukraine and the EU, the European Atomic Energy Community. The requirements for NPP safety were harmonized according to reference levels of the Western European Nuclear Regulators Association (WENRA) for reactor safety.

During this year, the Inspection ensured strict control over the implementation of the Comprehensive (integrated) Safety Improvement Program at NPPs. Based on positive state review results of C(i)SIP it was decided to extend lifetime of Zaporizhzhya NPP power units 1 and 2. The documents submitted by the Energoatom Company that justify possible lifetime extension of Rivne NPP – 3 and Zaporizhzhya NPP-3 are currently under assessment. “The international activity of the Inspection was efficient during this year. I would like to note successful participation of the regulatory body in the Washington Nuclear Safety Summit. Work is currently underway related to the participation of Ukrainian delegation in the VII Meeting of the Parties to the Convention on Nuclear Safety”, which will take place 27 March – 7 April in Vienna, Austria”, according to Borys Stoliarchuk, SNRIU Acting Chairman. “In addition, in 2016 the SNRIU signed the international cooperation agreements with the regulators of the USA, Republic of Moldova, Armenia and Hungary”. In November 2016, an important stage was completed within construction of the New Safe Confinement over the Shelter (NSC). This unique structure with the height of 110 meters, width of 257 meters, length of 164 meters and total weight of 36200 tons was moved from the installation zone to the distance of 327 meters and installed into the design position over the Shelter. NSC completion is expected in late 2017. The SNRIU will provide regulatory support to further activity related to NSC and other work at ChNPP site within decommissioning as well as radwaste management in the exclusion zone and at specialized enterprises.

An equally important achievement was continuation of nuclear fuel diversification in Ukraine to reduce dependence on a single supplier. Currently, trial operation of Westinghouse nuclear fuel is performed in mixed cores at SU NPP-2 and ZNPP-5. According to the plans of the Energoatom Company and the conceptual technical decision agreed with the SNRIU, Westinghouse fuel loading under extension of its trial operation is also planned in 2017 at ZNPP-1, 3 and 4. The SNRIU will continue in 2017 its activity in all abovementioned areas. The priority areas are: