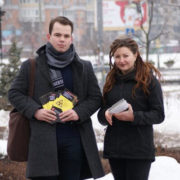 On 18 February 2017, the Uatom.org team together with the State Scientific and Technical Center for Nuclear and Radiation Safety (SSTC NRS) and the Youth Energy Community (YEC) conducted a promotion action in Kyiv Obolon District dedicated to orphan radioactive sources. The promoters distributed more than two hundred information leaflets, communicated with people, explained how to behave when finding a suspicious object with radiation warning sign. In general, Kyiv citizens were interested in the matter and answered the questions with pleasure. People took information leaflets about orphan radiation sources for themselves and sometimes for their children and relatives. “The reality of XXI century is more complicated than the ancient times. We faced nuclear accidents at Chornobyl NPP and Fukishima NPP, we had nuclear weapon testing, but we still know too little about radiation. Since this issue is vital and urgent, it is necessary to improve public awareness of these issues. It is my first experience of participating in such a promotion action, but hopefully not the last”, commented Yevheniia Nikitchuk, SSTC NRS expert. “The objective of this promotion action was to raise public awareness of radiation sources. After talking to people, it became obvious that this issue is little known, but quite interesting for them. I believe such actions are not just necessary, but vital. I want to thank my colleagues for participation in this important mission”, said Oleksandr Haran, press secretary of the Youth Energy Community. Presidium of the National Academy of Sciences of Ukraine approved “R&D...