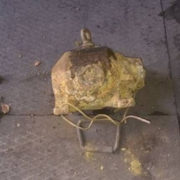 According to information received by the SNRIU in January 2017, radiation anomaly was detected at the Yenakiieve Iron and Steel Works during incoming radiation inspection on the surface of carriage with metal scrap. The retrieved object was transported for further storage to the Donetsk Radon Plant. Conditions of storage and further actions with radiation sources are not known to the SNRIU, since the stated plant is located in the territory temporarily beyond control of the Ukrainian authorities.

Promotion Action of Uatom.org Team and Its Partners in Obolon District