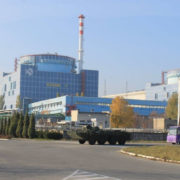 Probably, nothing frightens ordinary Ukrainians the way that the information received from nuclear power plants. The information on different types of emissions, fire and radiation is printed for weeks at the headlines of social networks and even some mass media– at any opportunity. Especially, if there is a threat of sabotage or terrorist acts on these strategic sites…

For example, in autumn 2016, the information space was rocked by news on opening of a criminal organization whose purpose was sabotage at Zaporizhzhya NPP (Enerhodar).

Given the fact that Ukraine wages hybrid war against the subtle enemy, the excitement of its citizens has reasonable background. Thus, by the example of Khmelnitsky nuclear power plant (KhNPP, Netishyn), Depo.ua decided to find out the  way in which nuclear power plant is protected and measures are taken to prevent different kinds of sabotage on strategic facilities. In order to improve the preparedness of forces and means of the physical protection systems and interdepartmental training and exercises for personnel involved in possible operations, as well as to develop joint actions and combat coordination in the units of different national security departments, the national guard arranges and performs command and staff multilevel tactical and special training and exercises with the involvement of forces and means of different departmental affiliation.

Given that Khmelnitsky NPP belongs to high-security state property, its surveillance area covers eight districts in Khmelnitsky and Rivne oblasts. That is, possible sabotage or suspicious groups or individuals are tracked and deactivated even at large distances from the station.

The main illegal actions against the facility are: attacks on KhNPP facilities, attacks on vehicles during nuclear fuel transport, acts of terrorism or sabotage against Khmelnytsky NPP, unlawful actions of radical elements in order to prevent normal functioning, hidden actions of internal offenders.

In order to take measures to prevent acts of terrorism on nuclear facility territory and accompany special cargoes, a special-purpose platoon was formed in 1997, the main function of which is to perform tasks related to emergency initiation at the guarded facility and near it according to the list of emergency measures established in the Decree of the President of Ukraine on Emergency State.

However, life goes on and the military personnel involved in NPP security was subjected to reforms. During last three years, the methodology of training and exercises for military personnel has been radically changed and improved to unprecedentedly high level since Ukraine gained its independence. A qualitatively new approach to provision of the military units of the National Guard of Ukraine with the newest equipment, weapons and hardware was implemented also for the military unit 3043. By the way, armament of this military unit can be seen from time to time during demonstrations of military equipment in the center of Netishyn.

In addition, both quantitative and qualitative composition of the troops involved into KhNPP defense has increased over the past decade. The number of military men who improved their educational level of professional qualification in the training centers of the National Guard of Ukraine grows year by year.

And in order to be in good shape all the time, international exercises are regularly held on the basis of military unit 3043, which allow gaining experience in defense of high-security objects in other countries thus establishing additional conditions to improve defense reliability at Khmelnytsky NPP. Today, more than fifty military men who guard KhNPP became war veterans of the antiterrorist operation in the East of the state.

By the example of Khmelnytsky NPP, Ukrainian NPPs are reliably guarded against possible sabotage, acts of terrorism and other threats. Therefore, if someone is looking for another “treason”, it is more reasonable to look for it somewhere else.