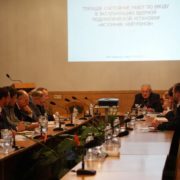 On 7 March 2017, the meeting on the commissioning and financing of activities of the Nuclear Subcritical Assembly “Neutron Source” was held in the National Academy of Sciences of Ukraine. Within the meeting, representatives of the National Scientific Center “Kharkiv Institute of Physics and Technology” (NSC KIPT) presented the draft Concept of the State Scientific and Technical Program “Use of the Neutron Source for the Benefit of Ukrainian Economy”.

“The Neutron Source is a unique innovation facility that today does not have analogues comparable in technical performance in the world. Unlike existing systems of similar class, where impulse neutron generators are used as external sources, electron accelerator will be used for the first time in the subcritical assembly core to control intensity of nuclear fission reaction for isotope uranium-235”, told Mykola Shulha, NSC KIPT Director General.

According to his words, the Neutron Source is the world’s first subcritical assembly with major energy release in the core (up to 300 kW). The system of outlet experimental channels of neutron beams will allow performance of a set of fundamental and applied research in the area.

“Scientific and technical support of nuclear energy and industry is extremely important for Ukraine. This is due to the fact that the problem of NPP decommissioning will be of a great concern in the nearest future. Besides, it would be necessary to decide on renewal of power generating capacities. The use of the Neutron Source is one of the most promising areas for the solution of these problems. In addition, the facility will contribute to the possibility of obtaining radioisotopes for medical purposes”, stated NSC KIPT Director General.

Ihor Ushakov, Deputy Manager of the Neutron Source, joined the discussion. He told about the current state of activities on the Neutron Source construction. “Today, pre-commissioning activities are ongoing at equipment of certain systems of the facility. Individual and functional tests were completed for 5 out of 18 systems important to safety. Technical Specifications and testing programs are under revision based on results of the state review of nuclear and radiation safety for seven systems. The documents are being developed for two more systems. Automated systems of radiation and individual dose monitoring have been put into service. SNRIU permit is needed for further initial startup of the facility and for first import of nuclear fuel to NSC KIPT industrial site. Agreement of documents with the Inspectorate is underway.

“NSC KIPT does not have money for commissioning of the Neutron Source. Therefore, once again we appeal to the government to help us solve this problem. If money is allocated, the initial startup of the facility can take place in the end of December 2017. I would like to emphasize that the Neutron Source is critical for the development of national science”, summed up Volodymyr Chyzhov, Deputy Director General for Economic Issues of NSC KIPT.

Representatives of the U.S. Department of Energy and U.S. Embassy in Ukraine promised to assist in solving challenging issues on commissioning and financing of activities of the Neutron Source.

Congratulations on the 8th of March!

According to Percentage Statistics, Most of Foreign Tourists Come to Chorno...
Scroll to top