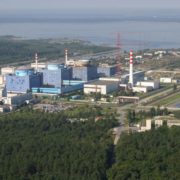 After introduction of the emergency state in power energy, the public and experts in this field actively discuss the need for and the possibility of NPP operation in daily load-following mode. The Uatom.org editorial board managed to communicate with experts in this field and specify conditions under which Ukraine can allow daily load control at domestic nuclear power plants.

SCIENTISTS STAND FOR THIS. PRECONDITIONS ARE AVAILABLE

According to the State Scientific and Technical Center for Nuclear and Radiation Safety (SSTC NRS), the issue on possible operation of domestic nuclear power plants in load-following mode arose due to variations in daily power energy consumption with a deficit of load-following capacities.

The deficit of load-following capacities is typical of the domestic power system related to current energy structure. During the last three years, this problem was complicated by record low water in spring and summer; as a result, hydroelectric power plants reduced electricity production almost twice. This year, an important reason for deficit was complicated thermal energy generation for load-following and blockage of coal supply from the uncontrolled territories.

The functioning of the integrated power system in the state under conditions of changes in the economic situation, physical aging of the main equipment at thermal stations, planned integration with the EU energy system and limited capacity of power supply lines raised a question on the advisability of NPP operation in daily power control mode.

15 NPP power units are currently operated in Ukraine. Zaporizhzhya NPP (six VVER-1000 units, each with capacity of 1000 МW) is located in the industrialized region; however, it has significant capacity limitations of power supply lines (about 5300 MW). This does not allow simultaneous operation of six power units at rated power. It is actually planned to make technical decisions (commissioning of one more overhead line) to ensure required capacity for ZNPP.

South-Ukrainian NPP (three VVER-1000 power units, each with capacity of 1000 МW) can redistribute a significant amount of electricity between the closest consumers. Daily variations will be compensated by the Tashlyk Pumped Storage Hydroelectric Power Plant.

The existing power system of Ukraine and measures planned for its improvement for ZNPP full power generation allow an efficient use of NPP power and consideration of NPP operation in daily power control mode. This issue is most relevant for nuclear power plants in the northwestern region. In general, it is necessary to note that NPPs are operated in daily power control mode in those countries where high percentage of power energy is generated by NPPs, but there is a deficit of load-following capacities. This directly relates to current situation in the energy sector of Ukraine.

The research related to the implementation of daily power control mode in Ukraine is underway at Khmelnitsky NPP unit 2. Stage 1 for mastering this mode was successfully conducted during the second fuel cycle in 2006. Significant work was performed for safety justification and a number of modernizations of NPP systems and components were implemented at that time to study the possibility of power unit operation in load-following mode. In particular, the control modes of energy release field of VVER-1000/V-320 were analyzed; the integrity of the fuel cladding under repeated cyclic changes in power was assessed; the resource of the main equipment of the reactor facility considering daily power control, etc., was analyzed. Two-stage testing was also performed to confirm the possibility of power unit operation in load-following mode. Stage 1 lasted four days in the first half of the second fuel cycle; stage 2 lasted six days in the middle of the second fuel cycle.

Positive conclusions were made resulting from the pilot operation.

In the framework of activities aimed at further study of possible operation of power units with VVER-1000 in load-following mode, the operator developed a number of documents that were subjected to state NRS review and agreed with the SNRIU.

Considering the importance of a detailed study of operation monitoring in control mode and justification of safety issues, it was decided to implement stages of additional (updated) trial operation.

Stage 1 of updated operation at KhNPP unit 2 was conducted from April 21 to May 11, 2015. During this period, 21 cycles of power change were implemented in accordance with requirements of the operational documentation.

No comments were made on work of personnel and equipment at Khmelnitsky NPP unit 2. Positive results of operation were included into the KhNPP report, which was considered by SNRIU and sent for revision. These comments were related to the need for implementing a number of modifications in process automation, optimization of reactor equipment operation, improvement of operational documentation and review of deterministic safety analysis.

The Energoatom Company actually works on preparedness for Stage 2 of improved operation (50 cycles). In addition, SNRIU received a technical decision on operation of ZNPP unit 1 in primary power control mode.

SNRIU experts believe that from a technical viewpoint, one of the most important requirements for the implementation of daily load-following mode is sufficient nuclear fuel reliability. Therefore, the Energoatom Company should assess possible consequences for the state of fuel and the primary power unit equipment during long-term application of daily power control mode.

SNRIU experts also noted that in addition to safety aspects, it is advisable to analyze the economic component and develop a feasibility study for implementation of this mode. This will enable determining actual effectiveness of load-following mode.

Summing up, experts of the nuclear regulator noted that daily load-following mode at domestic nuclear power plants can be implemented only after receiving the final conclusion on nuclear and radiation safety from the State Nuclear Regulatory Inspectorate of Ukraine. The mandatory requirements include the implementation of modifications specified upon pilot operation in daily power control mode, necessary amendments in the operational documentation, safety analysis review and successful individual and comprehensive testing of power unit equipment and systems.

Yuriy Nedashkovsky, President of the Energoatom Company, noted that the operator is interested in load-following mode implementation at domestic power units as this contributes to reliable operation of Ukraine’s energy system, and the application of appropriate economic approach can improve economic indicators of the Energoatom Company. At the same time, this operation mode should be implemented in compliance with all nuclear and radiation safety standards and regulations.

President of the Energoatom Company stated that NPP operation in load-following mode has always been a very specific topic, but it has acquired general attention and is very vividly discussed not only in the mass media but also in the governmental corridors. “A range of opinions expressed on this topic is very wide; unfortunately, extremely categorical statements were often made up to speculations on the “second Chornobyl” that can supposedly occur as a result of load-following mode implementation. Therefore, let me explain once again that “second Chornobyl” will not occur because the power units are currently unloaded and loaded in the design modes whose safety was justified”, Yuriy Nedashkovsky underlined.

According to experts, the company requires not less than 3-4 years for transfer to daily load-following mode. 200 unloading and loading cycles are required for full mastering of possible power unit operation in daily power control mode. Power units should be obligatory modernized to ensure safe operation during such modes. This work costs about 300 million UAH for one power unit. The operator should implement load-following mode at five of the 15 power units in order to be effective under conditions of new energy market. At the same time, first it is necessary to complete pilot operation of load-following mode at Khmelnitsky NPP unit 2. In order to apply daily power control at other power units, all necessary activities should be performed taking into account the experience related to implementation of this mode at KhNPP unit 2.

Behind Scenes of COVRA, Single Radioactive Waste Storage Facility in the Ne...