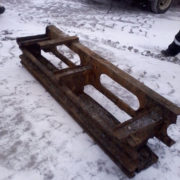 During the first quarter in 2017, the SNRIU State Inspectorates on Nuclear and Radiation Safety in cooperation with appropriate bodies of other central executive authorities of Ukraine continued activities aimed at revealing the illicit trafficking of radioactive materials beyond the regulatory control. One case of exceeding the equivalent dose rate was fixed in the Boryspil airport when a citizen of Ukraine transported a photographic lens.

In February 2017, law enforcement authorities detained a group of citizens of Ukraine who transported in their vehicle a Gammarid gamma flaw detector with depleted uranium shell. Since the equivalent gamma dose rate of the revealed items exceeded the established health and safety standards, they were seized and sent for further safe and secure storage to the State Interregional Special Plant of the Ukrainian State Corporation Radon.