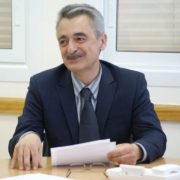 On 28 March, a meeting of SNRIU Public Council was held to specify the priority areas of activity for 2017. The event was opened by Borys Stoliarchuk, SNRIU Chairman: “A Board meeting was recently held at SNRIU during which we reported on the activities performed in 2016 and presented priorities for 2017. At present, the most important areas of activity for us are: permanent monitoring over implementation of the Comprehensive (Integrated) Safety Improvement Program for Nuclear Power Plants; licensing of the New Safe Confinement, construction of the spent nuclear fuel dry storage facility (IFS-2) and centralized spent fuel storage facility (centralized SFSF) in the exclusion zone; nuclear fuel diversification, etc. I would like to single out separately the SNRIU activity related to the harmonization of national legislation in accordance with the EU standards. I hope that the Public Council’s activity will contribute to SNRIU in every possible way in solving the most important issues in this field. The activity is efficiently performed in all areas”.

After a detailed discussion of the priorities for 2017, the Public Council decided to hold five scheduled meetings by the end of the year: two of them in May, and the rest of them in September, November and December. Issues to be considered by the Public Council in 2017:

–activities related to construction of the centralized spent fuel storage facility (centralized SFSF);
– results of the review meeting of the parties to the Convention on Nuclear Safety;
– strategy for development of the Chornobyl exclusion zone;
– current state of the spent nuclear fuel dry storage facility (ISF-2);
– commissioning of the New Safe Confinement in the exclusion zone;
– safe long-term operation of Zaporizhzhya NPP units. Members of the Public Council unanimously agreed the preliminary Action Plan for 2017.