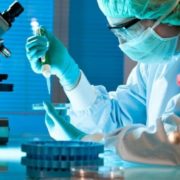 The Department of Nuclear Power Plants of the Odesa National Polytechnic University, the Information and Analytical Center for Nuclear Energy (EUAXIS) and the Institute for Nuclear Research of the National Academy of Sciences of Ukraine held recently workshop for journalists “Use of Radiation Technologies for Non-Energy Purposes” during which the experts answered in detail the questions on non-energy applications of nuclear technologies such as medicine, agriculture, food industry and other fields. During the workshop, considerable attention was paid to the application of nuclear physics achievements in medicine.

Despite the fact that radiopharmaceuticals are not produced in our country, although Ukraine has technical capacity to implement this production into practice, it was interesting to learn how radiation technologies were applied in the pharmacological industry. Valery Shevel, Deputy Chief Engineer of the Institute for Nuclear Research of the National Academy of Sciences (NAS) of Ukraine, presented a report on this subject. In particular, the speaker explained that radiopharmaceuticals are radioactive isotopes or their compounds with various inorganic/organic substances intended to biomedical research, radioisotope diagnosis and treatment of various diseases, mainly radiation therapy in malignant tumors.

Radioisotopes for radiopharmaceuticals can be produced by irradiating a special target inside a nuclear research reactor (or in particle accelerators such as cyclotrons).

The produced radioisotopes are attached as a label to certain molecules taking into account their biological characteristics; this resulted in formation of radiopharmaceuticals.

140 of currently known 3000 natural and artificial radionuclides are used in medicine for diagnosis, therapy and prevention of diseases.

For example, technetium-99 (99Тс) (produced by 99Мо9 isotope) is used in 80% of visual diagnostics of different human organs: localization of tumors in human body, monitoring of cardiologic function after heart attack, mapping of blood flow in the brain and assistance in surgical intervention. From 70 to 100 thousand scans are performed by means of it every day in the world.

Radiopharmaceuticals with radioisotopes emitting gamma rays or particles are used for diagnostic visualization of diseases; these emissions are captured by gamma camera or appropriate scanners.

Radioactive isotopes especially at the stage of early diagnosis can be highly effective for treating patients with cancer, lung diseases, bone tissue and deceases for which no effective healing methodologies exist yet in the world.

Modern medicine uses radiopharmaceuticals not only at the stage of diagnostics, but also for treatment of several diseases in the so-called radionuclide therapy. This type of treatment allows “targeted” delivery. Radiopharmaceuticals that effect on pathological focus are directly placed into the organism of a patient subjected to investigation. Due to the targeted delivery of radiopharmaceuticals in the focus, large radiation doses (up to hundreds of Gy) are absorbed, and surrounding tissues remain practically undamaged. Thus, the advantages of radionuclide therapy are obvious:

The speaker also noted that the main statistic indicator of the improved use of radiopharmaceuticals in the healthcare system in the countries of the European Union and the United States is the number of radiological studies per year for 1,000 patients. For example, in developed countries, this indicator makes up on average 40-50. According to different assessments, in Ukraine it does not exceed three studies per year! For comparison: about 36 thousand medical diagnostic procedures are annually performed in the USA with the use of radioisotopes and more than 50 thousand of nuclear therapeutic procedures. Every third patient who entered a hospital was subjected to radioisotope treatment. Thus, according to the speaker, there is a critical need to produce radionuclide products in Ukraine. Moreover, Ukraine has necessary technical capabilities for practical implementation of production. Mr. V. Shevel reported on successful experience of cooperation (in the field of 99Тc radionuclide production 99Ts) between the Ukrainian and foreign experts on the basis of the Kharkiv Institute of Physics and Technology. The Institute for Nuclear Research of the National Academy of Sciences of Ukraine has developed and implemented a technology for production of 99Мо radionuclide in research reactor channel.

Olena Oleinychenko, Head of PET/CT (computer tomography) Department of the Kyiv City Clinical Oncology Center, described in detail the use of nuclear technologies in medicine, in particular nuclear medicine the main application areas of which are oncology, cardiology and neurology.

The doctor also started her report with definitions. This is important, since nuclear medicine is a branch of clinical medicine related to the use of radioactive substances in the diagnostics and treatment of diseases. In contrast to radiology, nuclear medicine registers radiation emitted by body but not by radiation of external sources.

The treatment methodologies such as remote radiation therapy and radiosurgery are also widely used in nuclear medicine.

Radionuclide diagnostics is a methodology of organs and systems visualization by placing special diagnostic radiopharmaceuticals labeled by radionuclides into patient’s body.

Radionuclide diagnostics can be of two types: in vitro (in test tubes) and in vivo (in the body). Cancer diagnostics in vitro is performed without placing radiopharmaceuticals into patient’s body. The tissue biopsy of pathological focus is conducted for diagnostic purposes. Samples of tissues are placed in a tube where interaction with radioactive isotopes takes place, a methodology called radioimmunoassay.

During in vivo diagnostics, radiopharmaceuticals are injected directly inside the human body for measurement devices (gamma cameras, SPECT, PET scanners) to fix radiation.

In the practice of the world’s leading research centers, the following main methodologies of radionuclide diagnostics are applied:

Radionuclide therapy, namely treatment by means of open isotopes is used to heal diseases of thyroid gland, metastases in bones, diseases of the musculoskeletal system and neuroendocrine system.

The most common is radioiodine therapy and treatment of metastases in bones (one of the most common complications of solid cancer) by means of phosphorus, strontium and samarium.

The reporter also provided several examples in clinical practice demonstrating the effectiveness and possibility of PET diagnostics. In addition, the expert has noted that two PET-centers, four PET-scanners and one PET-department are currently open and are functioning in Ukraine.

Thus, at least 20 PET-CT installations should operate in Ukraine in order to heal patients with oncology at the European level. Orest Povoroznik, Doctor of Physical and Mathematical Sciences, Head of the Department of Nuclear Reactions of the Institute for Nuclear Research at the National Academy of Sciences of Ukraine, stated these data in his report. He also talked about another innovative area in medicine, namely radiosurgery where high-tech devices such as gamma knife and cyber-knife are used. Radiosurgery refers to minimally invasive interventions even in comparison with microsurgery. The operation (depending on the size of neoplasm) usually lasts only a few hours after which a patient can go home.

“Unfortunately, only one cyber knife was available in Ukraine until present”, the scientist underlined. He also turned attention to the treatment methodology such as brachytherapy. This treatment methodology for cancer patients allows the direction of the maximum radiation therapy dose to a malignant neoplasm and minimization of the effect on important human organs: radioactive micro sources (titanium capsules with radioisotope sealed by laser) are directly injected by special needles into tumor center.

An excursion to the research nuclear reactor (that is located on the territory of the Institute for Nuclear Research of the National Academy of Sciences of Ukraine and is the only one in Ukraine) was arranged for the workshop participants during which the experts of the Institute told journalists about the design of the research reactors that were primarily used as neutron sources for research and different applications. The most common reactor designs are for physical research, production of radionuclides; material testing; engineering research; basic and applied research in the field of radiation chemistry; research in neutron physics; radiobiological and medical research as well as personnel training.