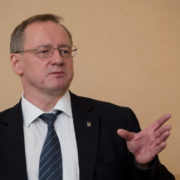 On 4 April, at the regular meeting, the Public Council of the Ministry for Energy and Coal Industry discussed the current state and measures to develop nuclear and industrial complex of Ukraine.

The meeting was chaired by Hero of Ukraine, Chairman of the Public Council of the Ministry for Energy and Coal Industry Semen Potashnyk.

The first speaker, the First Deputy Minister of the Ministry for Energy and Coal Industry Halyna Karp noted the importance of nuclear energy as a strategic branch for energy security of the country. She also highlighted that today the Ministry forms a legislative and regulatory framework of the issues urgent for efficient activities of the fuel and energy complex in Ukraine. Halyna Karp announced completion of developing the final version of the updated Energy Strategy of Ukraine until 2035, which defines the key tasks for enterprises and all participants of the energy area including energy security, diversification of energy sources and further development of the energy branch.

President of the Energoatom Company Iurii Nedashkovskyi informed on the status of the nuclear and industrial complex activities. He made a presentation on the Energoatom activities, focused on the achievements of the company and the main tasks of nuclear experts. The tasks include implementation of measures to increase unit power, diversification of nuclear fuel supply sources, construction of centralized SFSF and implementation of the project on own production of nuclear fuel. He mentioned the issue on Energy Bridge Ukraine – European Union, which will give the opportunity to sell surplus electric power generated by NPPs according to European prices. The company president said that an important part of the project is that long-term contract to export KhNPP-2 electric power is a financial instrument to complete KhNPP-3, 4. Director of the Department on Nuclear Energy and Nuclear and Industrial Complex of the Ministry for Energy and Coal Industry Gryhorii Plachkov emphasized that in March, the Energoatom made a daily record in electricity production providing 62% of the country’s electricity needs. This became possible due to commissioning of 750 kW high-voltage transmission line RNPP – Kyiv substation and use of KhNPP and RNPP capacities. Such indicators are important not only in terms of coal deficiency for thermal power plants, but are also the evidence of nuclear energy importance for energy security and economic stability of Ukraine. The Ministry for Energy and Coal Industry from its part according to Gregory Plachkov contributes to the maximum to timely consideration of documents necessary to solve challenging issues of company activities in the branch.

Director of State Concern Nuclear Fuel S. Drobot, Deputy Chairmen and members of the Public Council V. Korovkin, O. Shpak, S. Yatskevych, and others took the floor during the meeting.

In particular, V. Korovkin emphasized that it is important to maintain a proper level of nuclear generation in the Draft Energy Strategy until 2035. He also offered immediately to solve the issue at the state level on settling the tariff policy on nuclear energy since the industry requires safety measures, which are priority according to the international requirements. Moreover, V. Korovkin noted the possibility of shortening the repair campaigns and simultaneous increase of NPP unit capacity.

Members of the public interested in the possibility to involve NPP units in power maneuvering, strategic vision on decommissioning of the units with expired lifetime, etc. Director of the Department on Development Strategy for Fuel and Energy Complex and Investment Policy informed on the status of developing the Energy Strategy of Ukraine until 2035. In particular, he said about processing of more than 1100 proposals. According to him, the final draft document is ready for divulgation and consideration by the Cabinet of Ministers of Ukraine.

Representatives of public organizations gave a high appraisal of the nuclear and industrial complex of Ukraine and provide proposals to increase in future its efficiency.

Over 1.5 Million Forest Trees To Be Planted on 197 Hectares in Exclusion Zo...