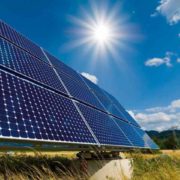 On 6 April, a kick-off meeting took place at Chornobyl NPP between the company’s management and representatives of the Solar Chernobyl Company, which is the tenant of the site where the panels of Chornobyl photovoltaic power plant will be installed. The general contractor of the new power plant construction is Rodina Energy Group Company.

According to Igor Gramotkin, Chornobyl NPP Director General, this pilot project is very important for Chornobyl NPP and the Exclusion Zone as a whole: “This project is our future and the future of our site, so we can’t help but implement it! Even if it is still very small now – only one megawatt of installed capacity, the first megawatt will be surely followed by the second”.

In the framework of the meeting, the project details were discussed. After the meeting, representatives of Solar Chornobyl Company visited the industrial site near the building of stage 2 switchgear and held a photo shooting, which was necessary for preparatory and project activities.