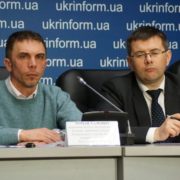 “This year, the IAEA gathered a record number of participants. The Seventh Review Meeting of Conventions on Nuclear Safety was attended by over 900 people”, said Roman Khalenko, expert of the State Nuclear Regulatory Inspectorate of Ukraine. It was he who presented the National Report of Ukraine in Vienna.

Roman Khalenko said that the Convention on Nuclear Safety was ratified by the Verkhovna Rada of Ukraine in 1997. “Since then, every three years we have to present the National Report of Ukraine on Nuclear Safety to the entire international community. In this year’s report, we spoke on the current state of nuclear and radiation safety in Ukraine. We focused on the main achievements in the field, namely on the harmonization of regulations and rules on nuclear and radiation safety according to WENRA reference levels, IAEA safety standards, EU Council Directives. We told about Ukraine’s participation in the European stress tests. We shared relevant information about the project on construction of the centralized spent fuel storage facility in the Exclusion Zone and about further commissioning of the New Safe Confinement. We spoke on the Comprehensive (Integrated) Safety Improvement Program, whose objective is to ensure maximum possible level of NPP safety”, said SNRIU expert. According to results of the Seventh Review Meeting of Convention on Nuclear Safety, Ukraine successfully coped with the tasks of the previous Sixth Review Meeting of Convention on Nuclear Safety held in 2014. Ukraine completed three out of four Challenges and implemented three out of four Proposals. According to results of comprehensive discussion, member countries to the Convention identified three new Challenges, one new Proposal and noted four Good Practices in Ukraine concerning nuclear safety.

The world community noted achievements of Ukraine in the harmonization of nuclear and radiation safety legislation according to European standards, assessed active participation in activities of the Western European Nuclear Regulators Association (WENRA). Besides, the participants of the Seventh Review Meeting of Convention on Nuclear Safety noted the significant achievements of Ukraine in ensuring reliability of nuclear fuel diversification. They also paid attention to the successful removal of spent nuclear fuel (including damaged) from spent fuel pools of ChNPP-1-3 to the spent fuel storage facility SFSF-1 and completed movement of the New Safe Confinement over the Shelter and destroyed ChNPP-4. Finally, Vitalii Petruk, Head of the State Agency of Ukraine on Exclusion Zone Management, described the current state of NSC construction. He said that the work is performed in accordance with the contractual schedules. Temporary facilities have been commissioned on ChNPP site. Engineering and technological studies are ongoing at Shelter industrial site. According to the contract performance schedule, the contract is expected to be completed on 30 November 2017.