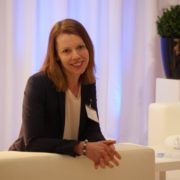 SKB, Swedish Nuclear Fuel and Waste Management Company, is tasked with managing Swedish nuclear and radioactive waste in a safe way. Nuclear power companies in Sweden jointly established SKB in the 1970s. The company’s assignment is to manage and dispose of all radioactive waste from Swedish nuclear power plants in such a way as to secure maximum safety for human beings and the environment.

SKB is responsible for a system of facilities used to handle all waste from the Swedish nuclear power plants. These facilities include a central interim storage facility for spent nuclear fuel (Clab) near Oskarshamn, and a final repository for short-lived radioactive waste (SFR) in Forsmark.

Uatom.org editorial board had a chance to talk with Anna Porelius, Head of Communications at SKB, about the main tasks of the company, unique technologies and plans for the future, you may read below. – Anna, could you, please, briefly describe a history of your company?

– The Swedish Nuclear Fuel and Waste Management Company was founded in the 1970-s. The first mission was to provide the Nuclear Power Plants with fresh fuel. Soon though, the mission was changed and we were instead given the task to handle all radioactive waste from the NPPs as well as the spent fuel.

SKB is owned by the nuclear power companies. They have a duty to deal with the disposal of the Swedish nuclear waste and also to pay for these operations.

– SKB is engaged in one of Sweden’s largest environmental protection projects. Our task is to deal with all radioactive waste from nuclear power plants in Sweden in a safe way.

In March 2011 SKB applied to the Radiation Safety Authority and the Land and Environment Court for permits to build a Spent Fuel Repository. The main hearing on this will begin in September this year.

Since the mid-1980-s we have both the Final Repository for Short-Lived Radioactive Waste (SFR) and Central Interim Storage Facility for Spent Nuclear Fuel (Clab) in operation. Safe transport of radioactive waste from the nuclear power plants takes place using our ship the M/S Sigrid.

– SFR is located in Forsmark, in the bedrock 50 meters below the sea. The Central Interim Storage Facility for Spent Nuclear Fuel (Clab) has been in operation since the 1980-s and is located in Oskarshamn. We keep 6 500 tons of spent nuclear fuel there in large storage pools 30 meters under the ground. It is kept there for 30-40 years before it can be sent to the future Final repository.

– What is the necessity of Final repository for spent nuclear fuel?

Finland intends to use the same method as Sweden, copper canisters surrounded by bentonite clay in a repository 500 meters deep in bedrock. Construction of a trial plant, Onkalo in Olkiluoto in the municipality of Eurajoki, began several years ago. In 2012, an application was submitted for a permit to extend Onkalo to become a final repository for spent nuclear fuel in the future. Following a positive recommendation from the Finnish Radiation Safety Authority STUK, the Finnish Government in November 2015 decided to approve Posiva’s application.

As Sweden is at the forefront, our programme has attracted great attention. SKB in Sweden has particularly close collaboration with our sister organization in Finland, Posiva. We also cooperate extensively with several other countries and their respective organizations. Exchanging research findings is part of this collaboration, as is the exchange of technology and experiences.

– Could you describe for our readers the unique technologies of the Final repository (KBS-3 method) in Sweden?

– We have done research on this method for about 40 years. There are 26 people with a PHD degree within our Research department.

In 2011, we submitted the applications to build the Final repository in Forsmark. SKB uses a special method for final disposal of the spent nuclear fuel. It is called KBS-3 and is based on three protective barriers: copper canisters, Bentonite clay and the Swedish bedrock.

All spent nuclear fuel is currently under temporary storage at the interim storage facility (Clab) in Oskarshamn. The radiation gradually decays and the waste becomes progressively less dangerous. But it also contains substances that are active for a very long time and these need to be finally disposed for many years to come.

SKB is therefore planning to construct a Spent Fuel Repository at Forsmark in Östhammars Municipality. The method that has been developed involves first encapsulating the nuclear fuel in copper canisters. The sealed copper canisters then will be placed in a system of tunnels about 500 meters deep in the solid bedrock. Here they will be embedded in Bentonite clay.

The copper canisters will have nodular cast iron inserts. They are five meters long and one single capsule will weigh about 25 tons when it is filled with spent fuel. The outer casing consists of five-centimeter-thick copper. The canisters have been constructed to withstand corrosion and the mechanical forces that can result from movements in the rock surrounding the Spent Fuel Repository.

The copper canisters will be embedded in Bentonite clay in the Spent Fuel Repository’s tunnels. This clay will act as a buffer and protect the canister from corrosion and minor movements in the bedrock.

The final barrier consists of the bedrock itself. The task of the rock is to isolate the waste. It provides a stable chemical environment and protection from events at ground level. But the bedrock also contains groundwater that flows through fractures in the rock. If any radioactive substances were to escape from a canister and penetrate the clay buffer, they could be caught by surfaces and minerals in these fractures and also in the rock’s micropores.

The bedrock and the great depth help to isolate the spent fuel from human beings and the environment for at least 100,000 years. This means that the canisters and the buffer will continue to function for a very long time. A safe final repository will have been created.

– Why did you choose Forsmark for this project? What was the reaction of the citizens like?

– More than 20 years ago we began to search for suitable sites. Finally only two good alternatives remained, Forsmark and Oskarshamn. In June 2009 we selected Forsmark. The reason was that our investigations showed that this was where the rock was most suitable for the purpose.

In March 2011 SKB applied to the Radiation Safety Authority and the Land and Environment Court for permits to build the Spent Fuel Repository at Forsmark. We expect this facility to be ready in the early 2030-s to receive the first deliveries of spent nuclear fuel for final disposal.

SKB has also applied for permits to construct an encapsulation plant in Oskarshamn, next to the Clab interim storage facility. This plant is where the spent nuclear fuel will be sealed into canisters before it is transported to the Spent Fuel Repository at Forsmark.

The citizens of Forsmark are used to nuclear facilities. For example, there is a NPP in the area.

– Did you have the face confrontation with ecologists (greens)?

– No, we have constant and constructive dialogue with them.

– Do you cooperate with mass-media?

– Yes, of course. We are open and give interviews and communicate with journalists. The local media is very interested in the work that SKB does and we are very pleased by this interest.

– How many people work in your company?

– At the moment, we are approximately 550 people at SKB. There are 25 within the Communications department.

– What problems does your company face right now?

– I wouldn’t call the things we are facing “problems”. We are rather seeing a lot of opportunities. This year is very important for us, because we will begin the main hearing in the process of reviewing our applications.

The Swedish Land and Environment Court has decided that the main hearing on SKB’s application for permits to build a Spent Fuel Repository at Forsmark and an encapsulation facility in Oskarshamn will begin in September 2017.

After the hearing, the Court will then recommend the Government to either grant or reject the applications. At this point the Government will also consult the relevant municipalities that are entitled to veto the projects: Östhammar when it comes to the Spent Fuel Repository and Oskarshamn for the encapsulation plant.

When the Government has reached its decision, the applications will again be referred to the Swedish Radiation Safety Authority and the Land and Environment Court, which will stipulate the terms and conditions for the facilities. It will then also be up to the municipalities to decide on planning permission under the Planning and Building Act.

Unscheduled and Unlimited Inspections Allowed at NPPs in Japan