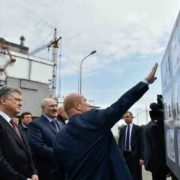 On the anniversary of Chornobyl accident that took place on April 26, 1986, President of Ukraine Petro Poroshenko and President of Belarus Alexander Lukashenko jointly commemorated Heroes of Chornobyl.

Petro Poroshenko noted that 31 years have passed since a terrible disaster at Chornobyl NPP, which is the biggest man-made disaster in the history of mankind. “What is Chornobyl for Ukraine? It is almost 10% of Ukrainian territory that faced a dreadful radiation damage. It is over three millions of people affected by this horrible disaster, its direct or remote in time and space consequences. I want to emphasize that 500 thousand of them are children. It is thousands and thousands of people from hundreds of villages, towns and cities that left their home. It is thousands of occasions of oncologic diseases and deaths caused by radiation,” the President stressed.

The Head of State noted that Ukrainians will always remember these unhealed wounds of the nation. And for a long time their reminders will be horrible diagnoses, certificates of disability and, unfortunately, certificates of death, the President added. According to him, along with Ukrainians, our brothers – Belarusians have also suffered most from this disaster. “Just as Ukrainians, Belarusians have passed circles of hell. The hardest challenges were faced by people from a wonderful Polesia, the birthplace of Ukrainian and Belarusian people,” the President said.

The Head of State emphasized that the aftermath of the disaster was a heavy burden for both Ukrainians and Belarusians and Chornobyl’s cloud of radioactive contamination swept across all regions, noticing neither borders nor different states.

Petro Poroshenko emphasized that on this day, we must recall a heroic feat of liquidators. “When we watched historic pictures of liquidation, we saw a true heroism that saved millions of Ukrainians and Belarusians. We can say frankly – this heroism saved the world,” he stressed.

The President emphasized that heroes-liquidators have been curbing the disaster saving humanity in the first minutes, days and weeks after the accident. “We can say that they were the guardian angels of humanity. Those were people of different professions and social status: military, miners, scientists, medics. And only due to their feat, hostile atom was confined. Low bow to those heroes, dead and alive,” he said.

Petro Poroshenko emphasized the importance of doing everything to prevent such disasters in the future. The Head of State thanked the international partners whose support helped build a new safe confinement over the old sarcophagus. According to him, in November 2017 this confinement is planned to be put into operation.

“This will allow safe work inside,” Petro Poroshenko said adding that not a single person received a status of liquidator and a dangerous dose of radiation during the work over the sarcophagus and inside. The President emphasized that commissioning of the confinement will guarantee at least 100 years of safe use. “It will protect us, our children, grandchildren and great-grandchildren,” he noted.

The Head of State emphasized that “Shelter” object is one of the most ambitious engineering projects in the history of mankind. He thanked all 40 countries-donors who came together for a noble goal – protection of humanity from radioactive consequences of tragedy. He noted that it is another evidence of the fact that the issue of environmental safety must be a priority in the global policy.

The Head of State also thanked the President of Belarus for joint efforts aimed to solve the issue of overcoming the aftermath of Chornobyl accident in the international arena, inter alia, in the UN. “Last year, at the initiative of Belarus, the UN General Assembly adopted a resolution on the long-term effects of Chornobyl disaster,” he said.

In his turn, President of Belarus Alexander Lukashenko noted that April 26 is a mourning date not only for Ukrainians and Belarusians, but also for the whole world. He reminded that Ukraine and Belarus cooperate in a series of projects on liquidation of consequences of Chornobyl tragedy. However, he believes the potential of the two countries is not fully used. The President of Belarus noted that Ukraine is planning to establish a radiation and environmental biosphere reserve in Chornobyl exclusion zone and Belarus is willing to share its experience in this issue, as it has long ago established state radiation and environmental reserve Polesia.

“Construction of sarcophagus over the ruined 4th power unit of Chornobyl NPP has become a remarkable event for all of us, Ukrainians and Belarusians, for Europe as a whole. This is a unique construction that has no analogues elsewhere in the world. Creation of the object with support of 40 countries is an important symbol of international solidarity not only for the Ukrainian people, but also for Belarus,” Alexander Lukashenko said. The Heads of State took part in the ceremony of honoring memory of the fallen liquidators and laid flowers to the monument to the Heroes of Chornobyl. 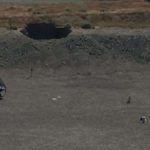