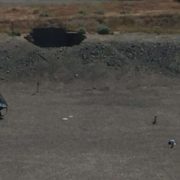 Hundreds of workers at the Department of Energy’s Hanford nuclear site in Washington state had to “take cover” Tuesday morning after the collapse of 20-foot-long portion of a tunnel used to store contaminated radioactive materials.

The Energy Department said it activated its emergency operations protocol after reports of a “cave-in” at the 200 East Area in Hanford, a sprawling complex about 200 miles from Seattle where the government has been working to clean up radioactive materials left over from the country’s nuclear weapons program.

The agency said in a statement that the 20-foot section is part of a tunnel that is hundreds of feet long and is “used to store contaminated materials.” The tunnel is one of two that run into the Plutonium Uranium Extraction Facility, also known as PUREX. The section that collapsed was “in an area where the two tunnels join together,” the department said.

The PUREX facility, once used to extract plutonium from spent nuclear fuel, has been idle for years but remains “highly contaminated,” the agency said.

Energy Department officials said there was “no indication of a release of contamination at this point” but that crews were still testing the area. Responders also were using a robot to take video and survey the damage. The department said that Energy Secretary Rick Perry had been briefed, adding that “everyone has been accounted for and there is no initial indication of any worker exposure or an airborne radiological release.”

But Edwin Lyman, a senior scientist at the Union of Concerned Scientists, said there is still cause for concern. “It appears that this is a potentially serious event,” he said. “Collapse of the earth covering the tunnels could lead to a considerable radiological release.”

An August 2015 report by Vanderbilt University’s civil and environmental engineering department said the PUREX facility and the two tunnels had “the potential for significant on-site consequences” and that “various pieces of dangerous debris and equipment containing or contaminated with dangerous/mixed waste” had been placed inside the tunnels.

Cleaning up radioactive materials at the Hanford site, which is a federal facility, has been one of the Energy Department’s priorities for years. Reactors at Hanford produced plutonium for the U.S. nuclear weapons program. Plutonium production there ended in 1980, and the cleanup program began in 1989.

Former Energy Department official Robert Alvarez said that remotely controlled rail cars once carried spent fuel from a reactor to the PUREX chemical processing facility, which then extracted dangerous plutonium. He said the plant lies near the middle of the sprawling 580-square mile Hanford site and was “a very high-hazard operation.”

Many contaminated pieces of equipment, including the rail cars, have simply been left in the tunnels, he said. The Vanderbilt report said that there were eight rail cars in the older tunnel and 28 in the newer one.

The cave-in was discovered during “routine surveillance,” according to the Energy Department. Photographs showed a gaping hole, plainly evident because the tunnels are largely above ground.

Workers near the PUREX facility were told to shelter in place, and access to the area was restricted, according to the Energy Department statement. Officials requested that the Federal Aviation Administration put a temporary flight restriction in place, according to the FAA.

The two tunnels are covered with about eight feet of soil, according to the Energy Department, which added that “the depth of the subsidence of soil appears to be into the tunnel.”

Alvarez, the former Energy Department official, cited a 1997 report that said the older tunnel was about 360 feet long, 22 feet high and 19 feet wide. Constructed decades ago, the walls of the older tunnel are 14 inches thick and held up by pressure-treated Douglas fir timbers, the report said. They rest on reinforced concrete footings. The newer tunnel was built with reinforced concrete.

In an email, Alvarez added that “the tunnels now store contaminated train cars and a considerable amount of highly radioactive, ignitable wastes including possible organic vapors.” And while the older tunnel is reinforced with timber, Alvarez said, “according to a 1997 DOE report, inspection of the tunnels ‘is not feasible because of radiation levels in excess of five roentgens per hour.’ ” A roentgen, or rad, is a measure of radioactive exposure; five roentgens is the annual limit for a U.S. nuclear worker.

Fixing the damaged tunnel could prove difficult. The Energy Department said on its Web site that officials are looking at options that would provide a barrier between the contaminated equipment in the tunnel and the outside air that would not cause the hole in the tunnel’s roof to widen further.

Although the Trump administration has vowed to slash the budgets of most Energy Department programs, the administration does not plan to skimp on the one charged with the Hanford cleanup and with other nuclear sites. It has requested $6.5 billion for the agency’s environmental management program for 2018.

The budget for Hanford alone is about $2.3 billion in the current fiscal year, about $1.5 billion of that going to the management and treatment of approximately 56 million gallons of radioactive liquid waste stored in underground storage tanks.

Trump has been slow to fill science-related positions, and he has not yet named a new assistant secretary for environmental management; a career department employee is serving in an acting capacity.

During his recent confirmation hearing, Perry was asked by Washington Sen. Maria Cantwell (D) about the Hanford site. “So are you committed to funding Hanford cleanup and what it takes and getting the waste treatment plant finished?” Cantwell asked.

“Senator, I’m committed to working with you and prioritizing what is one of the most dangerous, most polluted sites that we have in this country,” Perry replied. He vowed to visit Hanford and said he looked forward to “walking that site with you.”

On Tuesday, Cantwell issued a statement praising first responders and saying that she was monitoring reports. She said that “worker safety must be our number one priority, and we need to understand whether there has been any environmental contamination resulting from the subsidence at these tunnels.”

Gov. Jay Inslee (D) said in a statement he was aware that “a tunnel was breached that was used to bury radioactive waste from the production of plutonium at the Hanford Nuclear Reservation.”

“This is a serious situation, and ensuring the safety of the workers and the community is the top priority,” Inslee said.

Heroism of liquidators of Chornobyl accident saved the world – Presidents...

Vitalii Petruk: “We have modern storage facility for radioactive waste, but...
Scroll to top