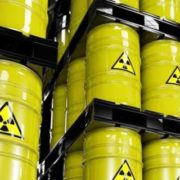 The Government has approved a project for construction of a centralized spent fuel storage facility for Ukrainian VVER NPPs.

The relevant draft Resolution of the Cabinet of Ministers of Ukraine on Approval of the Project “Construction of a Centralized Spent Fuel Storage Facility for Ukrainian VVER NPPs” has been recently approved by the Government.

With the adoption of this draft Cabinet Resolution, Ukraine will make a significant step forward to construct its own nuclear facility for the first time after it has gained independence. The operation of this facility will change the current scheme of spent nuclear fuel management at Ukrainian NPPs and ensure independence from Russian temporary storage services, thereby strengthening Ukraine’s energy security.

The objective of the draft Resolution is to determine the plan for implementation of the centralized SFSF construction project according to which the operating organization (Energoatom Company) will carry out construction and operational activities.

The activities will be covered by the Energoatom funds, which the Company will have to pay to Russian enterprises for temporary storage and reprocessing of spent nuclear fuel from Ukrainian NPPs until the storage facility is commissioned. The State Budget of Ukraine will not be involved.