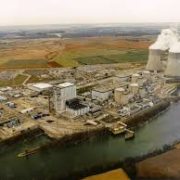 According to the information posted on the website of the Nuclear Regulatory Authority of France (ASN), on 19 June 2017 at 15:26 (UTC/GMT +1 hour), a fire occurred at French NPP Bugey 5. The burning occurred during repair on the roof of the building housing auxiliary power unit systems. Because of the fire, an emergency plan was put into effect and ASN crisis center was deployed.

The fire was eliminated at 16:30. The event did not affect on-site radiation background. According to EDF, nobody was injured during the fire.

Reference: Bugey NPP is located at a distance of 35 km to the east from Lyon on the Rhone riverside and consists of 4 operating power units with 900 MW pressurized water reactors (PWR). Direct flow cooling by water of the Rhone River is used at NPP-2, 3; cooling towers are used at NPP-4, 5. NPP-1 with a gas-cooled reactor was shut down in 1994.