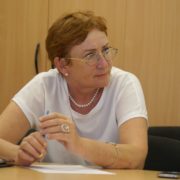 On 20 June, a meeting of the Public Council under the State Nuclear Regulatory Inspectorate of Ukraine was held. The status of implementing the project for the centralized spent fuel storage facility (centralized SFSF) in the Chernobyl Exclusion Zone was discussed.

Deputy Chairman of the Public Council, Oleksandr Haran, briefed the history of the facility, focusing on the most important stages. Olha Kosharna, Director on Information and Public Relations of the Ukrainian Nuclear Forum Association, also joined the discussion. In her opinion, one of the most topical issues in this area is the information policy of some politicians and Russian mass media against the construction of the centralized SFSF in Ukraine. “Every year we spend about $ 200 million for the transfer of spent fuel for storage and reprocessing to the Russian Federation. Today, the delay in the implementation of the centralized SFSF project is 12 years. It is not difficult to calculate how much money we have already lost. Of course, Russia does not want to lose an income source, therefore it does everything possible to discredit the project”, Olha Kosharna is convinced. According to her, construction of the centralized SFSF for Ukraine is very important, because it is economically advantageous and strengthens the energy security of the state. “Unfortunately, not all Ukrainian ecologists understand this”, she concluded.

During the meeting of the Public Council, the issue of current regulatory framework on control of radioactive waste management was also raised. It was decided to hold a regular meeting of the SNRIU Public Council jointly with the State Agency of Ukraine on Exclusion Zone Management to discuss the issues in more details and find ways to resolve them. The obligatory invitees include representatives of the Public Councils of the Ministry of Energy and Coal Industry and the Ministry of Health of Ukraine.

SNRIU Activates the Emergency Center within International Exercise under Severe...
Scroll to top