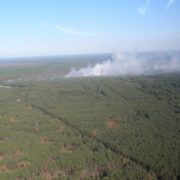 On 29 June at 12:35, the debris from wood felling caught fire on the territory of the Lubyansk forestry in the exclusion zone and spread over an area of about 20 hectares. Owing to a combined use of ground and air forces, the fire area was reduced to 8 hectares.

As of 30 June, 12:00, fire extinguishing continues. The involvement of ground forces is complicated by increased radiation background in the fire area.

The threat of fire spreading to other forest districts is absent.

The last updates can be found here.

According to the State Emergency Service of Ukraine