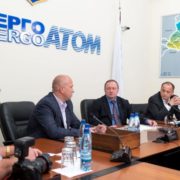 Yuri Nedashkovsky, Energoatom President, and Maksim Lisogor, Head of Ivankiv District State Administration, met on 7 July at the Energoatom Headquarters to discuss issues of social and economic development in the Ivankiv District of the Kyiv Region in connection with construction of the Centralized Spent Nuclear Fuel Storage Facility (CSFSF).

In his talk with Head of the District State Administration, Energoatom President emphasized the Company’s interest in as close cooperation as possible with local governments in the field of social and economic development and improvement of territories adjacent to the CSFSF site. “For the development of infrastructure in the surrounding areas, we managed to allocate a fairly large amount, about 3.7 billion UAH. It is the 10 percent provided for by the relevant law on CSFSF. After all, we are concerned not only with construction, but also with providing appropriate and comfortable living conditions for our builders, assembly workers, and subsequently operators”, Yuri Nedashkovsky said.

According to Nedashkovsky, in parallel with social and economic development and improvement of territories, attention must be paid to the creation of new jobs in the Ivankiv District. “We would like to cooperate with the District Administration for staff selection for CSFSF. Taking into account that CSFSF is to be located in the Chornobyl exclusion zone, where nobody lives, the optimum logistics for delivery of staff, even if they work in shifts, can be ensured exactly from the Ivankiv District. Yes, there are categories of staff who are to be trained longer than one or two years, but there are certain positions for this project that can be filled even now by staff with appropriate skills and competence from the nearest populated centers. We also intend to work with the local authorities to deploy a training program for CSFSF”, Yuri Nedashkovsky informed.

Energoatom Director pointed out that the Company was interested in the maximum location of the infrastructure for CSFSF maintenance in the areas closest to the storage facility. “Not only staff, but also related production facilities to cover technical needs of the storage facility in operation, must as far as possible be registered locally”, Yuri Nedashkovsky added.

“The Ivankiv District’s population is about 30,000 people; 27,000 of which have suffered from the Chornobyl accident. Thus, people are still afraid of nuclear energy and everything associated with it. But time goes on and we need to do as much as possible to raise the living standards for people who suffered from the Chornobyl accident. We all understand that the CSFSF project is extremely needed for the State, and Ivankiv and Polissya areas should receive a bonus from the construction of the storage facility such as investments in regional development. In particular, the issue of new jobs is very serious for us, so we would like to see the central office of the new Energoatom entity to be responsible for CSFSF namely in Ivankiv”, Maksim Lisogor emphasized.
The importance of informational and awareness-raising actions for the population of the region was also discussed at the meeting.

According to Energoatom Press Service

144 Illegal Entries to Exclusion Zone Registered Since Early This Year