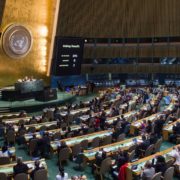 On 7 July 2017, 122 of the 193 United Nations Member States adopted a multilateral Treaty on the Prohibition of Nuclear Weapons at the Plenary Meeting at the UN Headquarters in New York. This is reported on the UN website.

The Netherlands voted against and Singapore abstained. None of the nine nuclear-weapon States – United States, Russia, United Kingdom, China, France, India, Pakistan, North Korea, and Israel – took part in the negotiations of the treaty or voting. DW notes that Germany and other NATO countries had the same position.

In a joint statement, the UN ambassadors for the United States, United Kingdom, and France said the treaty “clearly disregards the realities of the international security environment” and they had no intention to sign or ratify the treaty.

According to the treaty, the signatory States are obliged to never develop or possess nuclear weapons. The States are also prohibited to transfer weapons to one another.

The treaty states that most countries no longer consider nuclear weapons as a legitimate means of warfare. The treaty obliges to provide assistance to victims of testing and use of nuclear weapons.

The document will be open for signature on 20 September 2017 and will enter into force after it has been ratified by at least 50 countries.
According to report from the Stockholm International Peace Research Institute (SIPRI), nine nuclear-weapon States have approximately 14,935 nuclear warheads.
It should be recalled that the decision to draft the treaty was made in the UN General Assembly in December 2016. The resolution was signed by representatives of 123 states, while nuclear States, including Russia and about 30 other countries, voted against. China became the only one of the five permanent members of the UN Security Council that abstained during the vote.

The resolution required to hold a conference to negotiate a “legally binding instrument to prohibit nuclear weapons, leading towards their total elimination”.
The intergovernmental negotiations on the development of the treaty on the nuclear-weapon-proliferation treaty, which began in March this year, took place without the participation of a number of States, including the United States and Russia.