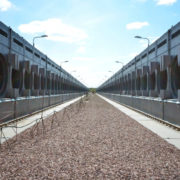 As of July 12, general construction works have been completed at the Interim Storage Facility (ISF-2). The tower crane has already been dismantled, which will enable the completion of activities related to the improvement of the territory in the near future. Finishing works in most of premises have also been completed. The works on equipment installation are now coming to an end.

Commissioning works are intensively continuing in the building of the Spent Fuel Processing Facility (SFPF). Tests of ISF-2 equipment and systems are proceeding at full throttle. Individual tests have been competed and the relevant documents have been issued for acceptance of approximately 15% of the total number of equipment after individual tests. 9 out of 24 load-lifting mechanisms have been tested under load. The state labour inspectorate issued permissions of operation of 8 load-lifting mechanisms.

Autonomous tests of the automated systems equipment have been performed, in particular, equipment of the Automatic Radiation Monitoring System (ARMS) and the Nuclear Materials Control and Accounting System (NMC&AS). Comprehensive tests of the NMC&AS have also been completed. Autonomous tests of equipment of the radiation monitoring system and the physical protection system are in progress. The complex test has been completed and documents for the acceptance of the compressed air preparation and supply system have been issued.

Work is being finalized on the revision of the ISF-2 Complex Tests Program with SFA simulators based on comments provided by SSTC NRS experts. The beginning of these tests is scheduled for early August 2017.

The beginning of ISF-2 “hot tests” (with transportation and processing of SFA) is scheduled for December 2017.