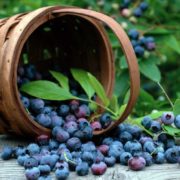 During the patrolling of the Exclusion Zone, law enforcement officers detected two women with more than 25 kg of blueberries near the resettled Yasen village in the Kyiv region. This was reported by the press service of the regional police.

It is noted that 39-year-old resident of the village and 60-year-old citizen of Kyiv entered Exclusion Zone territory outside the checkpoints to pick forest berries for their own consumption needs.

“The administrative protocols under article 461 “Violation of Radiation Safety Regime in Areas Exposed to Radioactive Contamination” of the Code of Ukraine on Administrative Offenses” were drawn up against two persons”, the police informed.

Women are accused of violation of the radiation safety regime conditions. The sanction of the relevant article in the Criminal Code provides for a fine from fifty to eighty non-taxable minimum incomes or restraint of liberty for the same term.