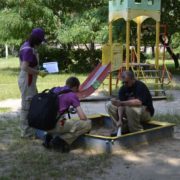 “On Rokosovsky street, near the well room, we found the building with a well where we detected an increased level of gamma radiation with dose rate of more than 5 µSv/h and level of surface contamination by alpha radionuclides approximately 0.2 Bq/cm2”, commented Eduard Sukhoverkhyi. “Having detected contamination, we immediately fenced the dangerous area with a warning tape in order to prevent access of people and informed the local authorities for a local response”. Oleksandr Diubo, head of housing cooperative, where the anomaly was detected, asked to take immediate actions to manage radioactive contamination of the area. “Children’s playground and sports area where children are constantly playing are located within 20 meters from the building. Alpha and gamma radiation can be of a significant threat to the children health”, he commented. One can assume that clay mixture, pulp extracted in the process of well cleaning is the contamination source. This spring, the adjacent area to the above mentioned building was covered with pulp. No dosimetric measurements were performed during implementation of activities, since nobody expected radioactive contamination.

Viktor Shelukhin, deputy mayor, was shocked by the revealed object. He thanked SSTC NRS experts for their work and assured that the management will do everything to manage the radioactive threat.

During the survey of other objects in the city, no anomalies were detected. Radiation background of Novohrad-Volynskyi is within normal limits.

Operation “STONE” was held in Ukraine
Scroll to top