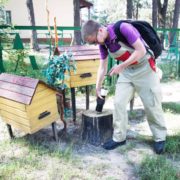 On 28 July, the experts of the Scientific and Technical Center for Nuclear and Radiation Safety (SSTC NRS) visited the city of Sarny in Rivne oblast to perform radiation survey. At the time, the city broke records according to the number of people willing to check foodstuff, personal items and even ground for content of radionuclides.

According to Iryna Poliakova, SSTC NRS expert, many extraordinary samples were brought for checking in Sarny. “Fat, meat, horseradish, salt, medicinal herbs and tobacco were checked for the first time within the information tour. Of course, not without foodstuff that got usual for us: vegetables, fruits, berries and milk. Still, most of all we were impressed by Mrs. Valentina from Sarny who brought two boxes with food and personal items for checking”, the expert noted.

According to the measurement results, the radionuclide content in the samples brought for checking did not exceed the norm. Nevertheless, according to Iryna Poliakova, the radionuclide level in fresh blueberries was slightly exceeding. “These berries were brought for checking by a man who said that he bought them in a food market. Having received the results, the man returned the blueberries to a saleswoman. I noticed that he came with a small child and did not want to risk his health”, SSTC NRS expert said.

Iryna Poliakova also added that in Sarny a container with ground was brought for checking that was transported by dosimetrists to Kyiv for a more detailed check. The results will be reported to the client after the end of the information tour. “In addition, there were many people in the city who wanted to check whether they had radionuclides in internal organs and tissues. Unfortunately, we did not conduct such research because we did not have necessary equipment”, she said.

Oleksandra Slepchenko, SSTC NRS dosimetrist, shared the measurement results of local objects. “We used RANIDSONNI reconnaissance vehicle and visited Sarny Forestry, a kindergarten on 17 Soborna Street, Sarny water canal and the central food market. The maximum dose rate of 0.12 microsieverts per hour was recorded on the territory of the forestry; 0.09 in the kindergarten; from 0.06 to 0.12 in the territory of the water canal; from 0.06 to 0.12 in the market. As you can see, the radiation background of the checked objects is within the normal limits”, the expert concluded.

Experts on Physical Protection, Accounting and Control of Nuclear Material to...