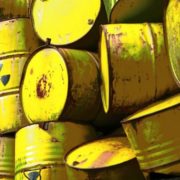 During the meeting of the XI International Donor Coordination Committee, current status of the projects under the “Global Partnership against the Spread of Weapons and Materials of Mass Destruction” initiative and forming an integrated system for management of radiation sources in Ukraine was discussed, as well as a new project was proposed on transferring 95 thousand of spent radiation sources (radioactive waste) from the Kyiv SISP to the Central Storage Facility for Spent Radiation Sources built at the expense of donors.

The event was attended by representatives of six donor countries: the United Kingdom, the United States, Canada and Sweden, France and Norway, as well as representatives of the European Commission and NATO. The event was held under the joint coordination of the State Agency of Ukraine on Exclusion Zone Management and the Department of Business, Energy and Industrial Policy of the United Kingdom (former Ministry of Energy and Climate Change).

The meeting defined significant progress and high level of implementing the international projects on international and technical assistance in Ukraine.

According to him, the Committee is a powerful and efficient tool that ensures a proper interaction and coordination of various donor activities on developing a system for spent radiation source management in Ukraine, as well as monitoring and promoting the implementation of the international and technical projects that provide expert and technical support to finance activities under this project.

During the meeting, the SEZA Head emphasized that under support of donor countries the most important projects are being implemented today in Ukraine:

–        support of commissioning and licensing of the Central Storage Facility for  Spent Radiation Sources under assistance of the Governments of the United Kingdom, the United States, Canada and Sweden, and the European Commission;

–        liquidation of disposal of legacy radiation sources (radioactive waste) under support of the NATO;

–        Orphan Source Amnesty Project under assistance of the USA.

In addition, reports of representatives of the donor countries on involving their countries in the projects implemented in Ukraine were presented.

At the same time, the delegation within the International Donor Committee visited the Kyiv SISP and CRME Vektor and was acquainted with activity progress on radioactive waste management.