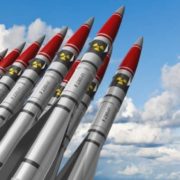 The latest nuclear test of North Korea is a serious threat to international security. Pyongyang must immediately refuse the development of weapons of mass destruction.

This is noted in the statement by Federica Mogherini, High Representative of the European Union for Foreign Affairs and Security Policy.

“North Korea nuclear test is direct and unacceptable violation of Pyongyang’s international obligations not to produce and test nuclear weapons as defined by numerous UN Security Council resolutions. It is a serious provocation that poses significant threat to regional and international safety and is a serious challenge for the global regime of non-proliferation of nuclear weapons”, Mogherini stated.

The statement emphasizes the position of the European Union: North Korea must urgently abandon its nuclear program, program on the production of weapons of mass destruction and ballistic missiles, and immediately stop all related measures.

Mogherini will raise the issue of North Korea on the agenda of the informal meeting of EU ministers for foreign affairs next week in Tallinn.

Mogherini hopes that the UN Security Council will consider the issue of a new nuclear test in North Korea and take a firm stand on it.

On Sunday, North Korea blew up the most powerful nuclear bomb in its history. Nuclear test caused an earthquake on the Korean peninsula.

Later, Pyongyang confirmed the successful test of the hydrogen bomb.

South Korea has promised to achieve new and more powerful sanctions of the UN Security Council for the complete isolation of North Korea.