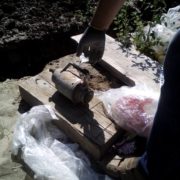 On 8 August 2017, in the Solomyanskyi district of the capital, “Gammaryd 192/120” radioisotope device was detected on the private territory with an increased level of gamma radiation. The exposure dose rate on device surface exceeded the Reference Levels approved by the Chief Medical Doctor of Kyiv and agreed with the Chief State Medical Doctor. In accordance with Cabinet Resolution “On Approval of the Procedure for Interaction between the Executive Bodies and Legal Entities Carrying Out Activities in Nuclear Energy Use in the Case of Detection of Radioactive Materials in Illicit Trafficking” No. 813 of 02 June 2003 after radioactivity survey it was decided to send the radioisotope device for temporary storage to the Kyiv SISP of the USC Radon.