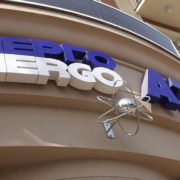 According to the Ukrinform’s correspondent, this was reported to journalists by President of the Energoatom Company Yurii Nedashkovsky on Thursday at the opening ceremony of the new Holtec plant in New Jersey (USA).

“There is a very interesting proposal made by President of Holtec International Chris Singh to our President Petro Poroshenko to form in Ukraine a hub for the distribution of small modular reactors with the localization of production and a very large number of equipment at Ukrainian enterprises,” the Energoatom Company said.

He specified that the question is SMR-160 reactors and Ukrainian corporation “Turboatom”, which has turbines in its production line suitable for this project is already involved.

“There is also a possibility to involve other Ukrainian enterprises”, Nedashkovskyi said.

He called the production of small modular reactors “an extremely promising” area in the construction of nuclear power plants.

“These reactors have an increased safety level since they use passive safety systems, it means, without pumping equipment, valves, etc. that requires external power supply”,  the Ukrainian enterprise head explained.

In addition, according to him, SMR-160 reactors are maneuverable, cheap enough compared to high-power reactors, may be constructed on small areas and do not require electric power supply.

“This project is already conceptually developed, and its licensing is expected to begin already next year and the active phase of construction will start approximately in 2023. We believe that this project is very interesting and promising for Ukraine”, Nedashkovskyi outlined.

Assessing future prospects, he noted that the need for small modular reactors after 2025 is estimated one trillion dollars. He said that partially this could be implemented in Ukraine.

Radioisotope Device with an Increased Level of Gamma Radiation Detected in ...