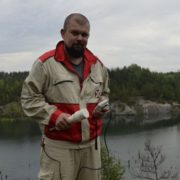 SSTC NRS experts prepared a detailed report on the results of information tour “Radiation Survey by Towns of Ukraine”. In summer, dosimetrists inspected the radiation background in six towns of the Zhytomyr, Rivne and Volyn regions.

The route of the information tour:

“According to survey results, the level of 137Cs in foodstuff, water and drinks was not exceeded in the towns under survey. The highest content of 137Cs was found in forestry products, namely: fresh and dried blueberries and mushrooms in Manevychi and Lyubeshiv, however the standards were not exceeded”, SSTC NRS technical expert Eduard Sukhoverkhyi says.

On the territory of the Korostyshiv Granite Quarry LLC, dosimetrists registered exposure dose rate of gamma radiation from 0.26 to 0.45 μSv/h. This is caused mainly by natural radiation sources in granites mined and processed at the enterprise. Although the dose criteria for the levels of public exposure from natural sources in Ukraine are not established (paragraph 19.1 of the Basic Health and Safety Rules of Ukraine), SSTC NRS experts do not advise to ignore slightly increased exposure dose rate on this territory. One way or another, it may have negative impact on human body.

During the information tour, thanks to locals, areas with an increased level of gamma radiation dose rate due to the contribution of natural radionuclides (uranium and thorium series) in Novohrad-Volynskyi and due to the contribution of man-made 137Cs in Korosten were also revealed and inspected. “We gave the information on these cases to the local authorities for further response”, Eduard Sukhoverkhyi summarizes.  “In general, the mission of the information tour was to raise the awareness of the public on radiation safety in the regions. In view of the fact that several radiation anomalies were ultimately detected, I believe that other regions of Ukraine also require radiation survey”.

Find the detailed report on the information tour here.

SURVEY RESULTS BY THE ROUTE:

According to survey results in Korostyshiv (Zhytomyr region), the permissible content of 137Cs in foodstuffs, water and drinks was not exceeded. The exposure dose rate of gamma radiation on the territory of Korostyshiv Granite Quarry LLC varies from 0.26 to 0.45 μSv/h. In general, the radiation dose in the town is from 0.08 to 0.39 μSv/h, in the public park near the canyon is up to 0.75 μSv/h. A slightly increased radiation dose level in Korostyshiv is caused by granite rocks (natural radionuclides).

In Novohrad-Volynskyi (Zhytomyr region), SSTC experts detected a local increase of radiation dose rate. In the Rokosovsky St., near the pump room, a building with a borehole was detected around which the experts registered gamma radiation with a dose rate of more than 5 μSv/h and a level of surface contamination by alpha-active radionuclides of about 0.2 Bq/cm2. This exceeds the background values by 10-50 times. The experts found natural radionuclides of uranium and thorium series in the soil radiation spectrum. It was defined that radioactive soil near the building where borehole equipment is located pose a hazard to the health of the public living in the vicinity.

The SSTC NRS experts immediately fenced the hazardous section by tape to prevent entry of people on the territory and reported to local authorities on the event for further response. The content of 137Cs in foodstuffs in Novohrad-Volynskyi was not exceeded.

The SSTC dosimetrists registered a slight increase of 137Cs in forestry products (mushrooms and berries) in urban-type settlement Manevychi (Volyn). However, this increase is within the limits established for these products. No radiation anomalies were revealed at industrial facilities of Manevychi.

In Lyubeshiv (Volyn region), a slightly increased content of 137Cs was observed in dried mushrooms and milk, but standards were not exceeded. The radiation background of Agrolis and Lishosp enterprises was within the natural values, contamination by man-made radionuclides was not registered.

Sarny (Rivne region) broke a record on the number of people who wanted to check foodstuffs and personal property for radiation content. No anomalies were detected in Sarny.

The information tour made the finish in Korosten (Zhytomyr region). In the Shevchenko Park, the dosimetrists registered an increased dose rate due to 137Cs of Chornobyl origin. A similar situation was in the Sverdlov St. in private sector. Two asphalted territories were found whose dose rate differed significantly from that of adjoining ones and was about 0.6 μSv/h. Due to the flood, people did not bring foodstuffs for inspection in Korosten. Thus, the SSTC experts, at their own discretion bought the necessary products for detailed inspection in Kyiv. The results showed that the content of 137Cs was not exceeded.

Information tour “Radiation Survey by Towns of Ukraine” took place from 24 July to 29 July 2017. Currently SSTC NRS receives applications from village heads and city mayors to define the route of the next information tour. Ask us and maybe soon we will come for radiation survey to you!

Physical Protection of Ukrainian NPPs Can Be Improved through Probabilistic...
Scroll to top