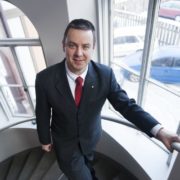 Jan Blomgren, Director General of the INBEX Institute for Nuclear Business Excellence, spoke on this issue during the XIV Ukrainian Conference on Physical Protection, Accounting and Control of Nuclear Materials. The event started on 18 September at South-Ukraine NPP (Yuzhnoukrainsk, Mykolaiv Oblast). “Everyone is well aware of 11 September 2001, when a series of terrorist attacks took place in the United States”, Jan Blomgren started. “The terrorists seized four passenger aircrafts, two of which crashed into the towers of the World Trade Center in New York. Another one was directed into the Pentagon building near Washington, and the aircraft crew of the last one managed to bring back control of the plane from terrorists, which resulted in aircraft crash on the field in Pennsylvania. After these events, terrorist houses were searched. It was found out that it was planned to seize eight planes. One of those eight planes had to destroy U.S. NPP”.

Probabilistic safety analysis in the USA was first introduced in 1970. This is a logical and structured approach to finding weak point in the system. PSA makes it possible to calculate all probable scenarios of threats to the NPP. There can be up to several thousands in the real life.

The benefits of PSA using have been noticed in the U.S. Department of Homeland Security. After that, 70% of all NPPs in the country have been analyzed. Previously unknown ways of access to NPPs were discovered at all of them. In addition, PSA revealed that all nuclear power plants, except for one, spend much more money for the needs of physical protection than necessary. Having examined the situation, the U.S. regulatory authority allowed reduction of costs provided that the security level of objects would remain on appropriate level.

“Five years ago, all this information was successfully concealed by the USA. The U.S. policy changed after the Islamic state entered the world arena. Currently, the United States are ready to share achievements in the area with friendly countries. Since June 2017, Ukraine has entered this list”, Jan Blomgren stated.

According to him, taking into account Ukrainian realities, Ukraine needs the strengthened system of physical protection at national nuclear power plants. It can be improved by the probabilistic safety analysis, which has been successfully used in the United States for many years. “The only thing is that PSA is not free. Its estimated cost for one nuclear power plant of Ukraine is about 6 million hryvnias. The total cost will be lower if PSA is ordered for all four nuclear power plants”.

Feedback between National Police of Ukraine and SNRIU to Be Established in ...
Scroll to top