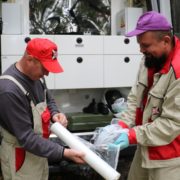 On 20 September 2017, experts of the State Scientific and Technical Center for Nuclear and Radiation Safety (SSTC NRS) inspected a site with radioactively contaminated materials generated after the Chernobyl accident in the vicinity of the Stara Markivka village (Polissya region, Kyiv oblast)”.

“We decided to check the information on probable location of the burial for radioactively contaminated objects near Stara Markivka in the vicinity of the Chernobyl Exclusion Zone”, SSTC NRS Press Secretary Tetiana Verbytska explains.  The burial is really found, it is located in the forest area at a distance of 300 meters from the settlement”. Its condition cannot be considered satisfactory since the warning signs of radiation hazard are imperceptible, and the barbed wire fence is practically absent. Thus, it is not difficult to enter the site and nothing can stop locals to collect mushrooms and berries, even directly in its territory.

During communication with the local public, SSTC representatives clarified that roof covers and other fragments of dwelling houses from neighboring Nova Markivka contaminated and dismantled after the Chernobyl accident were buried in the fenced area.

Site area is about 20×30 meters. Its border is directly near the forest road, where people go, collect mushrooms and berries. There is a warning sign most likely about the radiation hazard between the road and the site. However, taking into account that it was installed not less than 20 years ago, all the inscriptions were washed off by precipitation during that time”, SSTC NRS technical expert Eduard Sukhoverhyi comments. The radiation background around the burial is from 0.15 to 0.2 μSv/h. Exposure dose rate of gamma radiation in site territory and in the environment is at the same level and is equal to 0.2 μSv/h”. However, according to the experts’ measurements, there are places where the indexes range from 0.5 to 0.8 μSv/h. The main contribution to the radiation background of this area is made by Cesium-137 (137Cs) of Chornobyl origin. “Increase of radiation background is not a surprise, because the site we have revealed is several dozen kilometers away from the Chernobyl Exclusion Zone”, Eduard Sukhoverhyi notes.

It is necessary to take immediate measures to prevent the risks associated with any unauthorized activities or stay at the site with radioactively contaminated materials, as well as with collection of mushrooms and berries in its territory. They include restoration of fences and warning signs, informing relevant departments, local authorities and ultimately the local public on hazardous neighborhood.

During the radiation survey, SSTC experts took samples of soil, water and mushrooms for detailed studies. We will inform about their results on SSTC NRS website in the near future.

Feedback between National Police of Ukraine and SNRIU to Be Established in ...

Special Team for Cyber Defense of Nuclear Facilities to Be Established in U...
Scroll to top