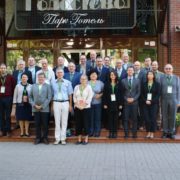 On 25-29 September 2017, the meeting of WENRA (Western European Nuclear Regulators Association) Working Group on Waste and Decommissioning is being held for the first time in Ukraine. On 26 September, an official opening of the Working Group meeting was held in the Park Hotel Holosiievo conference hall. Borys Stoliarchuk, Acting Chairman of the State Nuclear Regulatory Inspectorate of Ukraine, welcomed the participants. Currently, SNRIU scope covers safety regulation of significant number of facilities in Ukraine. Among them: 15 operating power units at four nuclear power plants; two operating spent fuel storage facilities at Zaporizhzhya and Chornobyl NPPs; research reactor; six specialized enterprises for radioactive waste management in various regions of Ukraine; radwaste temporary confinement points and storage facilities in the Exclusion Zone; uranium mining and processing facilities; significant number of radiation sources in medical, scientific and other institutions. “I want to single out Chornobyl NPP, which at the time is the only one in Ukraine at the decommissioning stage. Currently, final closure stage is underway”, Borys Stoliarchuk said. The New Safe Confinement of the Shelter, dry spent fuel storage facility and plants for liquid and solid radioactive waste treatment on ChNPP site are at the final stage of construction. Hot tests are underway at the centralized storage facility for spent radiation sources.
Facilities for processing of radioactive waste accumulated in NPP operation are being implemented at operating nuclear power plants of Ukraine. According to Borys Stoliarchuk, SNRIU representatives actively participate in WENRA Working Group on Waste and Decommissioning and Reactor Harmonization Working Group. A special board was arranged in the SNRIU within the harmonization of national regulatory requirements with WENRA reference levels. “Of course, this requires a lot of efforts and time, but I hope we will succeed in this. According to present challenges, active participation of Ukraine in new Association initiatives and further steps on the harmonization of national requirements for nuclear and radiation safety with WENRA reference levels will allow us to approach to European standards on nuclear and radiation safety regulation and to continue developing of common approaches to resolving main issues related to safety improvement of operating NPPs”, SNRIU Chairman concluded.
Follow our site for information on further events.

40 Years of Nuclear Energy in Ukraine

Slovak Regulatory Authority Not Ready to Issue License for Operation of Mochovce...
Scroll to top