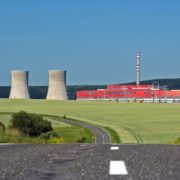 Recently it became known that the Nuclear Regulatory Authority of the Slovak Republic interrupted the administrative procedure in reviewing the application of the operating organization for obtaining a license to commission Mochovce NPP-3, 4.

The Mochovce NPP is one of the two nuclear power plants operating in the country located between Nitra and Levice cities near Mochovce village.

Until recently, two more power units (Units 3 and 4) of the Mochovce NPP were under construction. Their construction started in 1985, but in 1991, it was suspended for an indefinite period.

In 2008, the activities were recommenced by Enel Company (Italy). This year, the Italians completed construction. In order to obtain a license for commissioning of the facilities, the operating organization submitted a relevant documentation package to the Regulatory Authority. The Slovak Regulator raised a refusal arguing that the submitted document package was not complete.

The most important reasons for refusal are presented below.

“The administrative procedure of reviewing the application for commissioning of Units 3 and 4 will be renewed only upon submission of a complete document package to the regulator on readiness of all facilities of the fresh fuel node for operation, including the electrical fire alarm and air conditioning in the rooms”, stated in the notification of the Nuclear Regulatory Authority of the Slovak Republic. “Moreover, the document package should be submitted not later than 12 months after the date of suspension. If the deficiencies will not be removed within the specified time limit, the administrative procedure shall be suspended”.

According to the Slovak Regulatory Authority, in addition to the abovementioned documentation package, the operating organization should develop a number of other documents including reports of tests performed at the facilities for radioactive waste and spent nuclear fuel management for the operation of Mochovce NPP Unit 3, as well as for facilities common for Units 3 and 4, which are used for Unit 3 operation. Besides, facilities should be tested before Unit 3 commissioning.

New Project within the Global Partnership, or How Kyiv will Get Rid of Excessive...
Scroll to top