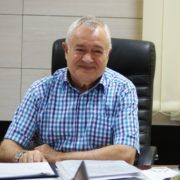 According to the most optimistic scenario, a new project for transport of 95 000 spent radiation sources (SRSs) from the Kyiv Special Enterprise to the Chornobyl Exclusion Zone will start already in 2018. The above mentioned SRSs will be stored in the Centralized Long-Term Storage Facility for Spent Radiation Sources (CLTSF) constructed at the expense of international donors at the Vektor site.

The issues on why the project is important for Ukraine, on its implementation status, current and expected difficulties were discussed by Uatom.org Editorial Board with Director General of Ukrainian State Corporation Radon (USC Radon) Valentyn Melnychenko and Director of State Specialized Enterprise Kyiv State Interregional Specialized Plant (SSE Kyiv SISP) Mykhailo Khodorivskyi. – Valentyn, the CLTSF was constructed in 2015. Were radioactive materials (in particular spent radiation sources) from other storage facilities of USC Radon located outside the Chornobyl Exclusion Zone transported to this facility during the last two years?

– CLTSF was constructed during 2012-2015 under the support of the Department of Energy and Climate Change of the United Kingdom of Great Britain and Northern Ireland. Additional funding came from the European Union countries, since the project was implemented under The Global Partnership against the Spread of Weapons and Materials of Mass Destruction Initiative. In total, 147 million hryvnias were spent to construct the storage facility.

The transport of waste (namely, SRS) from USC Radon to the CLTSF started last year when the facility obtained the License for hot tests. The first in this process was the SSE Kyiv SISP, then Kharkiv SISP and Dnipropetrovsk SISP. The transportation was performed for own funds of the corporation. We really wanted all this to finally work, so we invested in the transport without hesitation.

– What does “characterized” mean?

– Transport of radioactive materials is technologically complex process. If we are talking about “E’ or “BGI” sources, their transfer is possible only in special containers. Formally, one such container may contain 8 shielded SRSs. In turn, special vehicle available in the Kyiv SISP may contain one such container. It is not difficult to calculate how much trips a driver should do in order to transport a significant amount of waste. The Kharkiv SISP has vehicles, which may transport 16 SRSs at once.

Characterization is a procedure provided by CLTSF current operating procedure. It includes source identification, its photographing, and verification of certificate data, spectrometry; then sorting and certification. All this is conducted in the CLTSF.

At first sight, it may seem that there is nothing complicated in this process. However, it is not so. Sources transferred to the CLTSF are shielded (in simple words, this is a large lead ball with a metal rod inside, on which a radioactive source is fastened).

The source should be removed from this ball, identified and transferred to a special room of the CLTSF for storage. Of course, all this is conducted in the so-called hot cell due to very high radioactivity. Now then, there are cases when it is physically difficult to disassemble sources. The fact is that the majority of SRSs belong to legacy waste and are in a condition inappropriate for disassembling. If SRSs are in a satisfactory condition it is possible to disassemble several units per day, otherwise disassembling may take a few days. – Well, enough for the achievements of the last years. Mykhailo, tell when a new project on the transport of 95 000 SRSs from the Kyiv SISP to the CLTSF will be initiated?

– Currently, we do everything to get the project started in 2018. There are three urgent challenges: no License for commercial operation of the CLTSF, limited (by technology and equipment available) capacity of this facility for SRS acceptance, as well as no final decision of the Western investor on funding SRS transfer from special plants and CLTSF operation.

The design capacity of the CLTSF Stage 1 is 500 000 SRSs; purpose of the storage facility is to store the mentioned waste for 50 years.

Now, the hot tests are in progress. There is one thing: the Regulator does not allow transport of a significant amount of SRSs before completion of the tests. Only after the tests, the CLTSF will obtain a license for commercial operation and will be physically prepared to accept large SRS batches.

The next thing is CLTSF limited capacity for acceptance. The storage facility will not be able to accept a large number of sources (in case of fast entry of large SRS batches), characterize them and place for temporary storage. Therefore, the project envisages that a place for temporary storage of SRS containers, which will be transferred from the plant, should be provided at the Vektor site near the CLTSF.  A building is already provided for this, it is necessary only to finalize the documents and obtain an SNRIU permit for temporary placement of SRS containers there.

In general, we assume that the project will be implemented in two phases. The first phase is the transfer of 12 000 SRSs, which are actually prepared for transport; the second one is 83000 SRSs that require sorting and preliminary characterization. The second phase is technically more complicated and therefore more expensive.

Summing up, I will say: if there is funding for the project and technical capability of the CLTSF to accept a large number of sources the project could be successfully completed in 2.5 years.

– When 95 000 SRSs will leave the Kyiv SISP, what will remain at the specialized plant?

– In general, at least 280 000 spent radiation sources are stored in the Kyiv SISP storage facilities. The issue of their complete removal is not easy. SRSs are stored in different storage facilities under different conditions. It is necessary to develop individual technical decisions to solve the issues of their removal and transport to the CLTSF. This may be done, but under appropriate financial support of the state, domestic or international investors.

– Will you transport 95 000 SRSs by own efforts or involve other companies for assistance?

– Each of the USC Radon specialized plants has the License to transport radioactive materials, therefore, each of them has special equipped vehicles to transport them and a specific container fleet. Of course, it would be good to expand both the vehicle and container fleets in the future. For example, two special vehicles of the Kyiv SISP have a limited lifting capacity and cannot transport heavy 2-3 ton containers.

– Mykhailo, what is the significance of the project? Why radioactive materials from the Kyiv SISP should be transported to the Chornobyl Exclusion Zone?

– Implementation of this project will remove the most hazardous radioactive waste from Kyiv. In one of the Kyiv SISP storage facilities, 95 000 SRSs are stored. The issue is that this storage facility is surface and despite of the high level of its physical protection, the risk of unauthorized access to the facility still exists. Transport of the mentioned SRSs to the storage facility in the Chernobyl Exclusion Zone is envisaged to reduce this risk. In addition, the project implementation will contribute to further transfer of radioactive waste from Kyiv to the Chernobyl Exclusion Zone.

– Will CLTSF operation be safe?

–The storage facility is state-of-the-art with five process flows separately for storage of alpha, beta and gamma sources, neutron sources, as well as so-called RITEGs. During the design stage, review of the safety analysis for the facility was conducted by the SNRIU. At the same time, the safety analysis was performed for CLTSF siting on the territory of the Vektor site in the Chernobyl Exclusion Zone. The safe operation of the storage facility was proved many times.

Slovak Regulatory Authority Not Ready to Issue License for Operation of Mochovce...