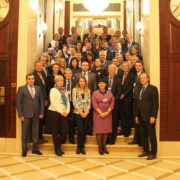 On 3 October 2017, international meeting “Nuclear Security in Ukraine: Information Sharing, Lessons Learned and Coordination” started in Intercontinental Hotel in Kyiv. The event is held in Ukraine for the first time. The Ministry of Energy and Coal Industry of Ukraine was the organizer and the Swedish Radiation Safety Authority and Norwegian Radiation Protection Authority were among the sponsors. Deputy Minister of Energy and Coal Industry, Natalia Boyko, opened the event: “This year, in Kyiv, we host the second coordination meeting on the exchange of information on technical assistance to Ukraine in the field of nuclear security within the Global Partnership Initiative. The first such meeting was held in Oslo (Norway) in 2016 and showed the importance of such activities in ensuring effective communication at the technical and political levels between the countries participating in the Initiative”. Representative of the Department for Nuclear Energy and Atomic Industrial Complex, Ministry of Energy and Coal Industry of Ukraine, Natalia Klos, added that, unfortunately, there are not so many public events in the field of nuclear security in Ukraine. “The Global Partnership meeting is a great opportunity for representatives of Ukrainian bodies to draw attention of the world community to urgent problems in the industry, establish effective communication and, as a result, receive technical assistance for the implementation of the most important measures to strengthen the physical protection regime in Ukraine,” notes the expert. Representative of the Department for Nuclear Energy and Atomic Industrial Complex, Ministry of Energy and Coal Industry of Ukraine, Natalia Klos

The Global Partnership against the Spread of Weapons and Materials of Mass Destruction was initiated in Canada in 2002 by a joint decision of the G8 countries. The main purpose of the Initiative was to facilitate the disarmament of the Russian Federation and other post-Soviet states. In the framework of the Global Partnership, funds were also allocated for the management of spent nuclear fuel and radioactive waste. In September 2004, Ukraine became a member of the Global Partnership as a beneficiary country.

“Before the revolution of dignity, before the beginning of war in Ukraine, the Initiative provided the greatest assistance to the Russian Federation. After Russia left G8, project cooperation in Ukraine became much more active. Today, representatives of domestic bodies report on the activities within the Global Partnership that took place in Ukraine during the last four years. Some departments present new projects for further implementation”, says Natalia Klos.

The State Nuclear Regulatory Inspectorate of Ukraine (SNRIU) was the first to present their achievements in this area. Deputy Head of the Nuclear Security and Safeguards Department, Victor Pashchenko, spoke about the Global Partnership projects implemented with direct participation of the SNRIU. “The first project is modernization of the SNRIU Information and Emergency Center to strengthen the capability to respond to nuclear incidents. The second project is to improve the state response system by conducting command and staff exercises. The third is intended for decommissioning of irradiation facilities and safe storage of radiation sources”, said Victor Pashchenko.

At the end of his speech, the SNRIU expert represented the new project “Combating Illegal Trafficking of Radioactive Materials in the East of Ukraine under Anti-Terrorist Operation”. According to the expert, the approximate cost of the project is 450,000 dollars. However, the project can be implemented only after the war in the East of Ukraine is ended and dangerous territories are demined.

Representative of the State Agency of Ukraine on Exclusion Zone Management (SAEZ), Lyubov Zinkevich, was the next to present achievements under the Global Partnership. “With our participation, a project is underway to support operation of the centralized storage facility for disused radiation sources in the Chornobyl exclusion zone. Today, hot tests are underway on the site. After they are completed and all important documents are finalized, the storage facility will be put into commercial operation”, says Lyubov Zinkevich.

Another project that is being implemented with SAEZ participation in the framework of the Initiative is the retrieval of disused radiation sources from well-type storage facilities of state interregional specialized plants (SISP) of the Ukrainian State Corporation ‘Radon’. The feasibility study has already been developed under the project, and technical decision and requirements for the containers to be used in the technology are being prepared. After the storage facility of the Kyiv SISP is decommissioned, disused radiation sources will be retrieved from other well-type storage facilities of Corporation ‘Radon’.

SAEZ currently coordinates two more projects within the Global Partnership: project on the management of radioactive material transport and project on the amnesty of radiation sources in the Dnipropetrovsk region.

“At the next meeting of the Global Partnership Group in Rome (Italy), we are going to address a project to improve the physical protection of the Pidlisny radioactive waste disposal site located in the Chornobyl exclusion zone. The disposal site was created in the first years of Chornobyl accident mitigation. The most dangerous, high-level and long-lived accident-origin radioactive waste is placed there”, noted Lyubov Zinkevich. Projects under the Global Partnership implemented under the auspices of the Ministry of Energy and Coal Industry were presented by Natalia Klos.

“The first project is opening of the master’s program to train experts on the Nuclear Security specialty within the Nuclear Energy area at the Igor Sikorsky Kyiv Polytechnic Institute (KPI). We do our best to enable the KPI students to enter this specialty by September 2019. It should be emphasized that no educational institution trains experts in this specialty in Ukraine,” said the expert of the Ministry of Energy and Coal Industry.

Another project within the Initiative is assessment of security culture as a protective and preventive measure to counteract the threat of an internal offender for operating nuclear power plants. The active stage of the project will begin next year – assessment of security culture will be carried out for the Rivne NPP. After that, this practice will be extended to all nuclear facilities of the state.

“The new project in this area is to ensure physical protection of facilities at the legacy uranium site of the former Prydniprovsk Chemical Plant in Dnipropetrovsk region. The project includes three sub-projects. The first is intended to create an engineering and technical system for site protection. The second is to reconstruct the perimeter of the Sukhachivske tail pit (first and second sections). The third is to reconstruct the perimeter of the Baza S tail pit. Let me note that the implementation of all three sub-projects is extremely important and needs response as soon as possible”, asserted Natalia Klos. In general, a series of projects were presented at the nuclear security meeting under the Global Partnership. Presentations were made by representatives of the Energoatom Company, Kharkiv Institute of Physics and Technology, National Guard of Ukraine, State Border Service, National Hydrometeorological Service and NATO. “I hope the meeting has been successful”, summarized Natalia Klos. “And the new projects presented by the Ukrainian side will be further implemented with support of the member countries under the Global Partnership. For our Ministry, for me personally, this is of great importance, since it contributes to strengthening the nuclear security of Ukraine and, consequently, improving the regime of non-proliferation of nuclear weapons in the world”.

New Project within the Global Partnership, or How Kyiv will Get Rid of Excessive...