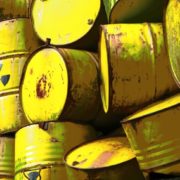 The share of electricity generated resulting from the operation of Ukrainian nuclear power plants is about 60%. This means that at least every second lamp in the state shines due to power generated by NPPs. Many challenges appeared currently in the national nuclear energy; one of the most urgent of them is spent nuclear fuel management.

Only Zaporizhzhya NPP has currently on-site spent fuel storage facility. Spent nuclear fuel from Rivne, South Ukraine and Khmelnitsky NPP is transported for processing and temporary storage to the Russian Federation. Ukraine pays annually 600 million US dollars for this service. During processing, the components are removed from spent nuclear fuel that are used in nuclear military technologies, and high-level radioactive waste generated resulting from this will be transported back to Ukraine. Its transport and further storage will also require additional financing.

Therefore, we asked the world-class experts in the field of nuclear and radiation safety what are the advantages and disadvantages of the construction of the centralized spent fuel storage facility in Ukraine and what strategy should be chosen for spent nuclear fuel management.

-Is it worth for Ukrainians to construct the Centralized SFSF?

– Do you think Ukraine is ready for the construction of the Centralized SFSF in the Chornobyl Exclusion Zone?

Jack Ramsey (Nuclear Regulatory Commission, USA): construction of the Centralized SFSF is a quite complicated issue. Construction of such facilities is equally problematic for the United States. We cooperated with the State Nuclear Regulatory Inspectorate of Ukraine in the framework of several projects. Over the past five years, we trained Ukrainian experts by sharing experience with them related to spent nuclear fuel storage in dry storage facility. In addition, we shared the methodology and details of licensing. As a result, experts of the nuclear regulator of Ukraine obtained in-depth knowledge in this sphere. I am sure that their decisions will be weighted and professional.

Malgorzata K.Sneve (Norwegian Radiation Protection Authority): Last year I visited the Chornobyl Exclusion Zone and studied in detail the nature of contamination in this area. I am convinced that strict compliance with safety requirements during radioactive waste disposal is very important, even if it is the case of radiation-contaminated areas where people will not live for a long time.

– What type of storage facility would you advise us to choose for Ukraine for spent nuclear fuel storage?

Jack Ramsey: This is hard to say. I would just note that there are the same debates in our country. There is no decisive answer. Spent nuclear fuel from US nuclear power plants is currently stored in the on-site storage facilities. Still, several companies submitted a request to the regulator for construction of the centralized storage facility.

We were also interested in how the problem of spent fuel management is solved in other countries.

– What strategy of spent fuel management was chosen in Armenia?

Vahagn Petrosian (Nuclear and Radiation Safety Center in Armenia): We store spent fuel in temporary on-site storage facilities, as transportation is quite problematic for us. Whatever be the choice of Ukraine: construction of centralized or on-site storage facility, I am sure that the facility should be constructed following all safety requirements.

– According to the Energiewende (Germany’s program for refusal of nuclear energy), Germany has probably technological solutions for spent nuclear fuel management. Tell us about your experience. How do you solve the problem of spent fuel storage in Germany?

Michael Schroeren (The Federal Ministry for the Environment, Nature Conservation, Building and Nuclear Safety in Germany (BMUB)): It is no secret that Germany has decided to refuse nuclear energy. It is sad but this did not solve the problem of spent fuel management. Nuclear energy in Germany was under development in the fifties of the last century. The state is currently in search of a place for spent nuclear fuel storage. 34 operators have already allocated 9 billion euros to overcome this problem.

As you see, all the experts we interviewed agreed that no matter how Ukraine would store nuclear fuel, the most important thing would be always compliance with safety requirements considering the interests of people living nearby and the desire to do everything to make the world safer.

RanidSONNI Mobile Laboratory may be used after the Military Operation in the...
Scroll to top