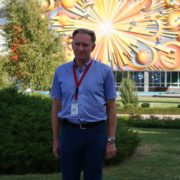 Volodymyr Dmytrash, Leading Engineer for nuclear materials accounting and control at South Ukrainian NPP informed on this within XIV Ukrainian Conference on Physical Protection, Accounting and Control of Nuclear Materials. The expert started his report with description of current situation on spent nuclear fuel management at the national NPPs. After that, he told about the steps taken by the Ministry of Energy and Coal Industry aimed at further development of the nuclear fuel cycle in Ukraine.

The Ministry of Energy and Coal Industry of Ukraine draw up the report “Development of Spent Nuclear Fuel Management Concept at Ukrainian NPPs” in which five probable spent nuclear fuel management scenarios were submitted for consideration until 2035.

The option allowing spent fuel from South-Ukrainian, Khmelnitsky and Rivne NPPs to be sent for disposal to the centralized spent fuel storage facility (Centralized SFSF) in the Exclusion Zone was recognized as the optimum one. Spent nuclear fuel sent to the Russian Federation for storage and processing has to be also processed there since 2025. If new power units will be constructed in Ukraine, spent nuclear fuel generated at them will also be transported there.

Regarding the realities of the present day, Volodymyr Dmytrash argues that timely commissioning of Centralized SFSF is an important factor. “I can demonstrate this challenge due to spent fuel pool filling at South Ukrainian NPP. Although, resulting from the analysis performed for other power plants, I do not think that the situation will significantly differ”, he noted.

Volodymyr Dmytrash concluded that resulting from untimely commissioning of the Centralized SFSF, no SU NPP power unit would be put out of scheduled outage after 2020. Thus, the only way to solve this issue for Ukraine is signing a new contract with the Russian Federation. However, no one knows what will be the price for this contract.

According to the Energoatom Company, the estimated date of Centralized SFSF commissioning is 2020-2021.

How to Manage Spent Nuclear Fuel in Ukraine? Advices of International Expe...
Scroll to top