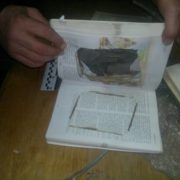 A sample of rock in a niche carved in the Children’s Bible was revealed in a parcel. Such items are withdrawn and transferred for further safe storage to specialized plants of Radon Corporation. Similar souvenirs with an excess of radium-226 were withdrawn at the airports of Lviv and Kyiv (Boryspil airport).

There are cases of withdrawal of radiation sources from scrap metal supplied to metallurgical plants. Thus, at the end of September, a RIO-3 radioisotope ice-detecting device containing strontium-90 + yttrium-90 was revealed during the incoming radiation inspection of scrap metal at the Azovstal Iron & Steel Works. In Kherson seaport, a part of metal pipe with significant excess of the regulated values was withdrawn from a scrap metal batch to be sent to Turkey.

A tripod level gage for a military device containing radium-226 salts was withdrawn from a car trunk of a Ukrainian citizen at Novotroitsk entry/exit checkpoint at the entrance to Ukraine.