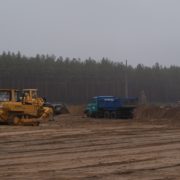 “The project to build the centralized spent nuclear fuel storage facility in combination with the diversification of supplies of fresh nuclear fuel is an outpost of Ukraine against the hybrid war,” Deputy Prime Minister of Ukraine Volodymyr Kistion said at a ceremony devoted to the beginning of construction works. He recalled that earlier Ukraine faced a problem when Russia refused accepting spent nuclear fuel from Ukraine for storage for near three years. Then it made the nuclear energy complex operating in the crisis conditions.

U.S. Ambassador to Ukraine Marie Yovanovitch said that the United States backs the centralized spent nuclear fuel storage facility project in every way and recalled that OPIC provides guarantees for $250 million to build this facility.

She said that the centralized spent nuclear fuel storage facility is a strategic facility for Ukraine. It would allow cutting dependence on Russia and save billions of U.S. dollars, she said.

Yovanovitch said that according to her information, since the moment of initiating the project (20050 and until now Ukraine had spent around $2 billion to remove spent nuclear fuel to Russia for temporary storage.

Ukrainian Energy and Coal Industry Minister Ihor Nasalyk said that thanks to the storage facility Ukraine would be able to cut its expenses by 60%.

Warning: Use of undefined constant ICL_LANGUAGE_NAME_EN - assumed 'ICL_LANGUAGE_NAME_EN' (this will throw an Error in a future version of PHP) in /home/uatom01/uatom.org/www/wp-content/themes/enfold/framework/php/class-framework-widgets.php on line 73
Scroll to top