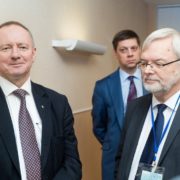 Yurii Nedashkovskyi, Energoatom President, and Andrzej Piotrowski, Vice Minister of Energy of Poland, discussed the status of the Ukraine-EU Energy Bridge Project that envisages export of power from KhNPP-2 to EU countries.

The meeting of Yurii Nedashkovskyi and Andrzej Piotrowski was conducted on 20 November within the information visit of Polish delegation to KhNPP.

Polish delegation also included Jozef Sobolewski, Director of the Department of Nuclear Energy at Ministry of Energy of Poland, Paweł Zaręba, Vice President of PGE EJ 1 sp. z o.o. (subdivision of Polish Energy Company PGE created to implement the project on the construction of the first nuclear power plant in Poland), Boguslaw Oleksy, Executive Director for Asset Management of the Tauron Group Energy Company, and others.

Commenting on the project’s prospects, Yurii Nedashkovskyi stated that the Ukraine-EU Energy Bridge project can become a link between the energy systems of Northern and Southern Europe. “Power lines from KhNPP-2 to Polish Rzeszow and South Ukrainian substation and then to the Hungarian Albertirsa substation in the future can become not only an energy bridge to Europe, but also an energy bridge between Northern and Southern Europe. The capacity of such a bridge will be about two thousand megawatts from each side”, Energoatom President noted.

He recalled that the Ukraine-EU Energy Bridge project was approved at the state level, the relevant feasibility study has already been completed and the documents for international tender is being prepared. “We expect that together with the Ministry of Energy and Coal Industry of Ukraine, Ministry of Finances and Ministry of Economy of Ukraine we will complete relevant activities by the end of the year and at the beginning of the next year and international tender will be announced”, Yurii Nedashkovskyi specified.

At the same time, Energoatom President stated that there are still a lot of technical issues to be solved within the project preparation. “We are now preparing to work in several areas: the first one is to restore 750 kV transmission line to Rzeszow and the second one is to take efforts at KhNPP, which envisage modernization of open switchgear of the plant for safe disconnection of KhNPP-2 from the Unified Energy System of Ukraine and its connection to ENTSO-E. To do this, we need to mount the block transformer at KhNPP-3 with an advance rate. Besides, we should ensure emergency power for the needs of KhNPP-2 at the expense of an additional source. The third area is to reconstruct the South Ukrainian substation to divide it by voltage classes: leave 330 kV voltage class to work for Ukraine and allocate 750 kV voltage class for export to Albertirsa. Therefore, KhNPP-2 power will be provided for two main interstate lines. All activities are now at the level of project decisions and they will be financed by an investor that wins the competition”, Yurii Nedashkovskyi explained.

Andrzej Piotrowski, Vice Minister of Energy of Poland, expressed his hope for the successful solution of all technical and organizational issues related to the implementation of the Ukraine-EU Energy Bridge project”. “We have a long way to go, but I hope that step by step we will found a solution for all the issues that confront us. We will look for opportunities for further deepening of cooperation between Poland and Ukraine in the energy industry”, Andrzej Piotrowski stated.

During the meeting, Yurii Nedashkovskyi and Andrzej Piotrowski discussed the state and prospects for the completion of KhNPP Units 3 and 4.

Draft Law on Completion of Two KhNPP Units Can Be Submitted to Verkhovna Rada...
Scroll to top