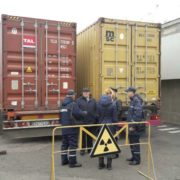 According to the information received by the SNRIU, on 20 October 2017, two sea containers were detained at the Odesa Sea Commercial Port, which transported magnesium scrap from the United Arab Emirates to one of the Ukrainian enterprises. The detention was caused by actuation of the Yantar portal radiation control system.

According to Cabinet Resolution “On Approval of the Procedure for Interaction between the Executive Bodies and Legal Entities Carrying Out Activities in Nuclear Energy Use in the Case of Detection of Radioactive Materials in Illicit Trafficking” No. 813 of 02 June 2003, a working group involving representatives of the SNRIU Southern Nuclear Inspection on Radiation Safety was formed to inspect containers.

According to measurement results, EDR excess on container surface was 3.5 μSv h and 6.5 μSv/h correspondingly. Remote spectrometric analysis revealed that exceeded gamma-radiation EDR was caused by the presence of 226Ra radionuclides contained in unidentified objects inside the containers. There were no documents confirming the legality of radioactive material presence in the freight (magnesium scrap).

In compliance with Article 53 of the Law of Ukraine “On Nuclear Energy Use and Radiation Safety”, transport of radioactive waste to the territory of Ukraine from territories of other states is prohibited. The Odessa Customs of the State Fiscal Service of Ukraine, in accordance with the Customs Code of Ukraine, made a decision regarding the return of the goods to the sender.

On 13 November 2017, the containers with freight were loaded on a foreign going ship and released outside the customs territory of Ukraine for further forwarding to recipient address.

Draft Law on Completion of Two KhNPP Units Can Be Submitted to Verkhovna Rada...

What Is Environics and Its Distinction in Ukraine?
Scroll to top