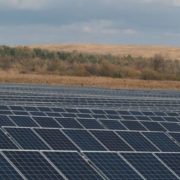 The first solar energy project will be completed in Chornobyl already next month. This will be a step forward to the plans aimed at investment of 100 million euros into the construction of renewable energy sources in the radioactive exclusion zone.

According to Bloomberg, this project belongs to Ukrainian Company Rodina Energy Group Ltd and German Company Enerparc AG. The capacity of the solar power plant reaches one megawatt, and its construction costs one million euros.

“Our aim is stage-by-stage optimization of the Chornobyl zone. It should not be a black hole in Ukraine. Our project is located 100 meters away from the reactor”, Yevhenii Varyiahin, Executive Director of Rodina Energy Group, said.

The publication recalls that the Ministry of Ecology and Natural Resources of Ukraine announced in July 2016 its intention to breathe life into the 30-kilometer zone, which remains almost uninhabited since 1986 after the Chornobyl accident. Radiation makes the use of the territory unsuitable for forestry and agriculture. Therefore, green energy is considered something that can be productive in the exclusion zone. In addition, it is connected to large cities of Ukraine by energy transmission lines, which previously transferred electric current from ChNPP.

In order to attract investors, the government offers cheap land and relatively high basing rate. Rodina and Enerparc have entered into an agreement under which they will receive 15 euro cents per kilowatt-hour until 2030. This is almost 40% higher price than anywhere else in Europe.

“The price is higher because it is a risky market. I think, investors are looking for higher incomes there”, Pietro Radoyia, alternative energy analyst, said.

According to Bloomberg Editorial Board

Towards Energy Independence of Ukraine: CSFSF