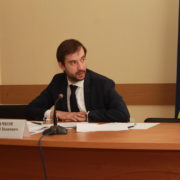 On 30 November 2017, the Board of the State Nuclear Regulatory Inspectorate of Ukraine conducted a meeting. Three issues were discussed during the meeting. The first one aimed at the presentation and approval of the National Report on the First Peer Review on Ageing Management. The second issue dealt with the progress of activities on Rivne NPP Unit 3 long-term operation. The third one aimed at the investigation of events at national NPPs in 2017, and calculation of safety performance indicators from 2015 to 2017.

Hryhorii Plachkov, SNRIU Chairman, opened the Board meeting and he focused on the relevance of concerned issues for nuclear and radiation safety of the state. “Given the fact that Ukraine has chosen a European vector of development, implementation of Council Directive 2014/87/Euratom into the Ukrainian legislation is a very important issue for us today. Consideration and approval of the National Report on the First Peer Review on Ageing Management is one of significant components to reach this goal”, Hryhorii Plachkov said.

Summing up, Oleksii Shuhailo noted that current regulatory and legal framework of Ukraine with regard to requirements for ageing management is at a level comparable to IAEA and WENRA safety recommendations and documents. This is confirmed by the results of independent inspections carried out by Western experts within international projects. After that, he listed potential good practices in the area and those requiring improvement.

After presentation of the National Report, Board members unanimously voted for the approval of the document provided it is amended with regard to potential practices to be improved.

Then, the Report will be published on the SNRIU website in Ukrainian and English. After this, it will be analyzed by international experts. “Representatives of the Inspectorate will present the report at WENRA meeting, after which they will discuss it with European colleagues. They usually provide a set of questions, comments and remarks. The comments are systemized and at the end of the review of all reports from member states the comments are sent to each individual country as recommendations”, Yurii Hrebeniuk informed on the further fate of the National Report.

Pavlo Pavlyshyn, Rivne NPP Director General, spoke on the progress of activities on long-term operation of RNPP-3. On 11 December 2017, the design life of RNPP-3 will expire. The operating organization Energoatom addressed to the SNRIU on the operation of this power unit under shutdown state with complete unloading of fuel from the core for the period of taking required organizational and technical measures to justify its possible long-term operation. Having heard the details about the readiness of RNPP-3 for operation in the shutdown state, the SNRIU Board members unanimously supported this decision.

The third issue within the Board meeting was the most resonant. Dmytro Vorontsov, Head of Laboratory for NPP Operational Experience Analysis of the NPP Operational Safety Analysis Department in the SSTC NRS, told about the events that occurred in the current year at operating NPPs of Ukraine, shared the details on their investigation.

Based on the results of the discussion, which was attended by representatives of the SNRIU, SSTC NRS, Energoatom Company and who were invited to the Board meeting, made the following decisions:

Besides, SNRIU Board paid attention of the Energoatom Company to the need to provide the reports on NPP operational events with detailed justification of the defined level of the event according to the INES scale, which shall be presented in the strict compliance with the provisions of the IAEA guideline “INES: The International Nuclear and Radiological Event Scale User’s Manual. 2008 Edition” and NP 306.2.100‑2004.

The operating organization shall ensure on a permanent basis the use of a single approach to the investigation of events at all NPP sites and documentation of its results.