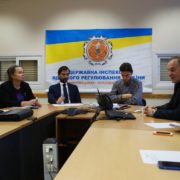 On 04 December 2017, a meeting of the Public Council of the State Nuclear Regulatory Inspectorate of Ukraine was conducted. Hryhorii Plachkov, SNRIU Chairman, informed during the meeting that the Inspection on Nuclear Safety at Chornobyl NPP will be rearranged. “Currently, the staff of the Inspection at the ChNPP consists of two employees. Given the amount of facilities that have already been constructed and that are under construction in the Chornobyl exclusion zone, the number of employees shall be increased. Besides, the powers of the Inspection shall cover the whole exclusion zone and not only ChNPP site”, Hryhorii Plachkov stated. The Public Council approved the Chairman’s decision unanimously. According to Serhii Deriuha, NSC Project Manager, NOVARKA contracting organization is having some problems related to the delay in the project implementation. In view of this, NSC commissioning will be postponed from the end of November 2017 to the end of May 2018. Public Council members expressed doubts about such a course of events and noted that most likely the date of commissioning will not be as it was defined.

After that, the decision was made to hold a joint meeting of the Public Councils of the SNRIU and the State Agency of Ukraine on Exclusion Zone Management, where the participants will discuss the update of the strategy on the Shelter transformation into the environmentally safe system. It was stated the dry spent fuel storage facility (ISF-2) is to be commissioned in the second quarter of 2018. The meeting of the Public Council also covered the issue on the radioactive contamination by Ru-106. Following the report of Tetiana Kutuzova, Head of Emergency Preparedness and Radiation Protection Division in the SNRIU, Public Council members decided to write a letter to the National Security and Defense Council of Ukraine and the Cabinet of Ministers of Ukraine on the development and functioning of the unified radiation monitoring system that would significantly improve the process of revealing radiation anomalies in Ukraine.

Moreover, Olha Kosharna, Deputy Head of the Public Council of the SNRIU, spoke on the report on the tariffs of the National Commission on State Regulation of Energy and Utilities for the Energoatom Company.