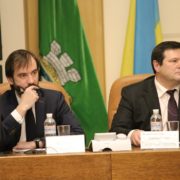 Ievhen Shumkov, Energoatom Director on Long-Term Operation, considers such an approach to be the most appropriate for SUNPP team and Energoatom Company in general. “Given the fact that SUNPP has wide experience, in particular that the SUNPP-1 and SUNPP-2 were successfully approved for long-term operation, the preparedness of engineering measures on SUNPP-3 is very high. We believe that SUNPP-3 team will do everything necessary according to the schedule. The team is aimed at success, so I am sure that everything will be good”, Ievhen Shumkov said in an interview with the media representative.

For more than two years before the end of design lifetime of SUNPP-3 (February 2020), the decisions within the long-term operation were agreed upon 6 out of 12 groups of equipment, buildings and structures of SUNPP. Other groups are under control and efforts are ongoing for decision agreement. The activities on the qualification of SUNPP-3 equipment for harsh environmental conditions and seismic effects were performed in full scope. The safety review report is under active development. 37 measures of the Comprehensive (Integrated) Safety Improvement Program (C(I)SIP) out of 97 measures that are planned for SUNPP-3 have been implemented as of today. The remaining measures are under implementation.

“A lot is still to be done in future by SUNPP, SSTC NRS and SNRIU”, Hryhorii Plachkov summed up in an interview with the media representative. He stated that he was satisfied with the information and those indicators that were presented during the meeting. Speaking to meeting participants, SNRIU Chairman emphasized the following: “You have a great task to implement. Once again, I will mention a difficult situation with energy resources in Ukraine. The whole country is now expecting flawless work of the Energoatom”.