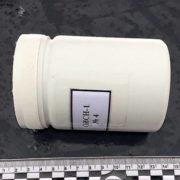 Two Kharkiv citizens aged 48 and 65 who were traveling by private car toward capital were detained by police of the Chornobyl Exclusion Zone in the village of Stari Petrivtsi of Vyshhorod district in Kyiv oblast. Items with possible signs of radioactively contaminated substances were revealed in the cabin of their car.

Investigative actions are currently under performance. The point of delivery of these substances and the purpose of their further use are determined.

The removed items were sent for investigation to one of the environmental centers.

Meanwhile, the prosecutor’s office develops procedural documents for the court on arresting the vehicle that transported the substances and on declaring suspicion to the detainees.

According to this fact, crime investigators started criminal proceedings under Part 2 of Article 262 of the Criminal Code of Ukraine (“Stealing, Appropriation or Extortion of Firearms, Ammunition, Explosives or Radioactive Material, or Obtaining them by Fraud of Abuse of Office”). The Article envisages up to ten years of imprisonment.

In turn, the State Agency of Ukraine on Exclusion Zone Management set up a commission to identify the conditions for origin and export of these substances.

Congratulations to All Power Engineers of the Country with the Holiday!