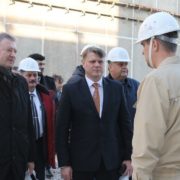 On 27 December 2017, the final production meeting on putting the ZNPP Radioactive Waste Treatment Plant (RWTP) into trial operation was held at Zaporizhzhya NPP under the leadership of Oleksandr Shavlakov, first Vice-President and Technical Director of the Energoatom Company, with participation of representatives of the Company, contracting and design organizations, and specialists from Zaporizhzhya NPP. Having started the meeting, Oleksandr Shavlakov noted that the Energoatom Company and Zaporizhzhya NPP have fulfilled their obligations to put the radioactive waste treatment plant that is part of the national radioactive waste management program. This event is of high importance. He thanked the team of constructors, mounters, teams of contractors who took part in the construction of the facility, designers and operators for quality and successful work.

During the production meeting, Technical Project Manager and Deputy Head of the Decontamination Department Serhii Pikhtin presented the goal of construction, the main tasks, composition of the complex, operation purpose and principle of each facility in the complex, cost and expected outputs of future commercial operation.

He also noted that the scope of work performed allowed preliminary tests of RWTP in mid-December thereby confirming the possibility of putting the complex into trial operation on radwaste simulators.

Summing up the meeting, Oleksandr Ostapovets, Zaporizhzhya NPP Director General, thanked everyone who participated in the implementation of this project. He emphasized also its importance in terms of creating new workplaces that are relevant today for the satellite city.

Participants of the meeting made walkdown of complex rooms and inspected the mounted equipment. Testing of the complex on actual radioactive waste with subsequent putting into commercial operation is planned in 2018.